Every season has something to recommend it. Winter has its woolens and hot cocoa and cozy evenings by the fire. Spring has its air of anticipation and energy, all colors and new life. Fall has its stately colors and crisp mornings, fresh-picked apples and Eagles football.

Summer has large swaths of nothingness, and I love that. Sitting on the beach for hours, doing nothing. Well, reading, building sand castles, swimming, collecting sea shells, but mostly, doing nothing at all productive. There's the pool and the library and the mini-golf course, there's a little summer camp maybe and some whiffle ball in the backyard, but there are countless hours of lazing around, with nothing to show for it except maybe a sweaty pitcher of lemonade, a few more chapters read, or a few more rows knit.

This is my way of explaining my absence from the blog. In embracing the laziness of summer, I've just not been motivated to photograph and post. But I have been knitting. And today, on this lazy Sunday that will involve no more than a swim, a pedicure, and perhaps the making of a chocolate cake, I have the inclination to post.

There's been some sock knitting (a single Jaywalker), some baby knitting (just needs buttons), some sweater knitting (this one's almost done), and a finished cowl. 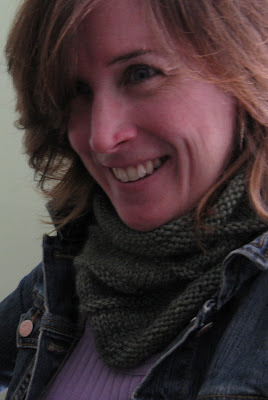 I've finally submitted to the siren song of the knitted neck tube. This yarn, the Fibre Company's Road to China just screams to be made into a cowl. Luxuriously soft, with those incredible color variations of the Fibre Company's for which you pay richly (or snatch up for 50% off at MDSW), this is a very special yarn. I used the Aspen Cowl pattern, and two beautiful skeins of malachite Road to China. I have several other cowl-ish yarns in my stash, and upon seeing this picture in my flickr stream, my sister (ecokate on flickr)  instantly requested one. So look to see more cowls in this is space in the near future.

Soft cowls like this almost make me eager for cool mornings and crisp afternoons of autumn. But this autumn, my youngest starts kindergarten, and my beautiful years as a mother at home with small children really do come to an end. So I think I'll hold on to these lazy, do-nothing-together days as long as I can.
Posted by Liz K. at 10:14 AM 7 comments:

I cast on for Ene's Scarf (Ravelry link) last week. This is the first time I'm knitting a lace shawl from the outside in, so to speak. Casting on 375 stitches just about made me insane and the whole project seems so daunting. But then we discovered that the kids brought back lice from Norway. Thus began hours upon hours of combing hair and laundry. 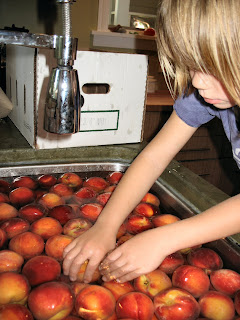 As a pleasant summer break from the nit-picking, we drove out to the country to pick peaches. Then came the endless peeling, pitting, and canning that nearly put me over the edge. 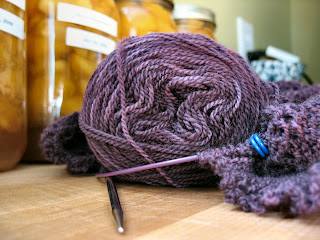 Now, after 15 quarts of preserves and 2 lice-free girls, Ene's Scarf? Not so intimidating after all.
Posted by Ann at 8:04 AM 9 comments: 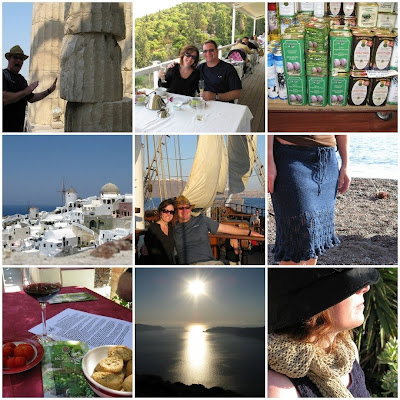 I've been back from Greece for close to two weeks, and have been busy reconnecting with my real life again. It would take weeks to share all the stories of once-in-a-lifetime, pinch me moments, like watching the sunset over the Aegean from the deck of a sailboat, learning Cretan cooking tricks in a 200 year old olive oil factory, or eating the best gyro ever, so if you are interested, check out the pictures here on my flickr set. I've tried to annotate them and share a few stories there.

Besides celebrating our tenth anniversary on a rooftop in Athens, drinking (too much) raki in Crete and marveling at ancient Greek ruins nestled in beside modern soulless apartment buildings, we relaxed and reconnected, enjoying some rare, extended kid-free time (who were being spoiled beyond limit by their grandmothers).

So. As I promised, the socks that I knit in Norway. Now I truly knit three socks since I frogged an entire completed one that I had rushed. It didn't fit over R's foot. Not an insignificant problem. I was experimenting with calf-shaping and I guess I took it a bit too far. R has skinny calves but big feet. Am I wrong or is this a challenge? 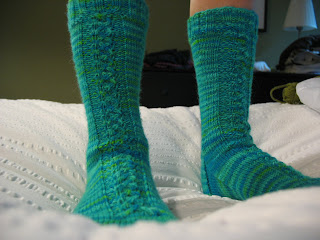 I ended up decreasing stitches up at the top and then increasing them again before the heel. It works alright except it does take her a while to get them on (but then she's not that quick about any aspect of getting dressed). The pattern is a strip of crisscrossing cables down the front and back. 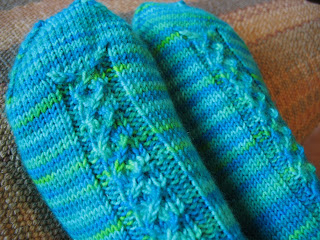 Since the colorway is Lagoon and they did remind me of the gorgeous water of Norway, I am calling these the Norwegian Lagoon socks. 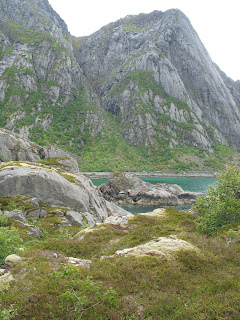 R loves them and she is so excited about wearing them -- unfortunately she'll probably grow out of them by the time fall arrives here in Virginia. So I may have to start another pair for her soon ... 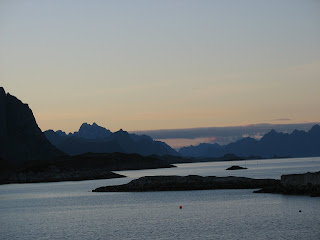 And here is a gratuitous picture of the midnight sun in Henningsvær at 1:30am.

I was very indecisive about which yarn to bring with me on this trip. It had to be a sock yarn because of course I would be knitting socks (easy to pack, easy to knit) and it had to be beautiful because I'd knit nothing else for two weeks.

After pulling out a number of skeins of Socks That Rock and Lorna's Laces, I settled on a skein of Colinette Jitterbug in Lagoon. Brilliant! It's a stunning yarn and practically sprang onto my needles!

I knit these socks all over this spectacular country. 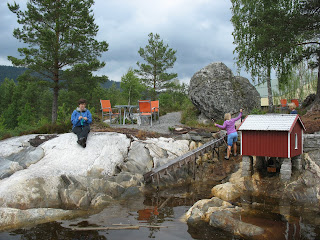 At the Pangarden's Waterway where the girls blissfully spent almost two hours in freezing cold water playing with locks, shutes, and water wheels. 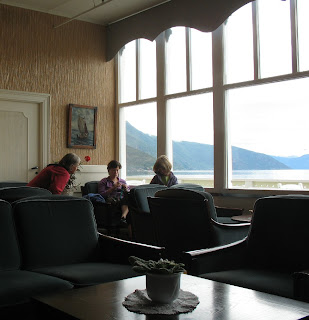 At the Kvikne's Hotel in Balestrand -- by far the most gorgeous hotel on our trip in the middle of the Sognefjord. 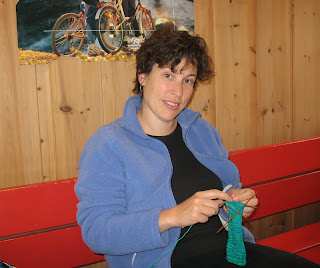 Tired and travel weary at the train station. 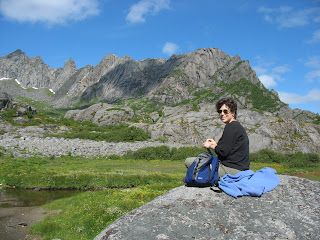 And in the place the rock climbers call Paradise off Kallestrand in the Lofoten Islands.

Next post I'll show you the finished socks!
Posted by Ann at 8:43 PM 5 comments: 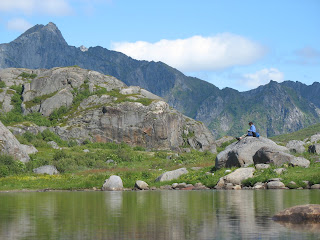 Here I am knitting in the wilds of the Lofoten Islands

... and jet lagged. I don't know how Liz is feeling right now, but I could sure use a nap. Hope Greece was warm and beautiful! Norway was cold, very cold, and beautiful. I'll post more soon when I can sleep more than 4 hours in a row ...
Posted by Ann at 8:26 PM 6 comments: