Enough with the Socks Already!

Alas, my membership in the SSLS was very, very short. I am too type-A to be leaving single socks laying around, waiting for their mate. So, another finished pair of socks to report, my first for the Summer of Socks KAL. 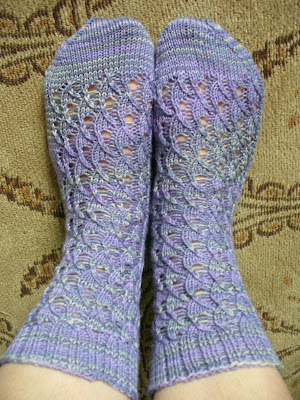 Yarn & Needles: Tess Supersock & Baby, Twilight colorway, 2.75mm (US 2) KnitPicks circs
I love the twist and spring of this yarn, but I do not like two things: lots of pooling on the foot, and the dye the yarn left on my fingers. The pooling is somewhat masked by the shell pattern, but it pools nonetheless.

Pattern Mods: I had no intention of modifying this sock, and originally knit the first one with no modifications whatsoever. When I knit the second sock, I made the heel flap several rows too long because I wasn't paying attention to the pattern. I assume a heel flap has 30 rows, with 15 slipped chain stitches to pick up, and did this on the second sock, and proceeded to decrease for the gusset as usual, back down to 60 stitches.

The CFS calls for only 26 rows in the heel flap. I noticed my mistake when I tried on the second sock and it fit so much better across the instep with a longer flap. The foot of the first sock did some seriously ugly pooling as well, so I was happy to rip it out and lengthen the heel flap to match the better-fitting second sock. 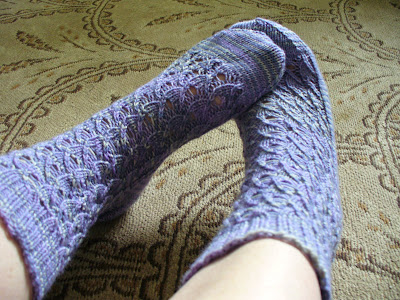 Now, never would I question the genius that is Nancy Bush, but future CFS knitters might want to lengthen their heel flap too. I remembered Megan complaining that her CFS did not fit across her instep originally either. Megan and I have seriously different feet -- she is quite tall and has, um, substantial feet, while I am quite short, and my feet are decidedly small. Very different feet, same problem -- you do the math.

Despite this little issue, my torrid summer affair with Nancy Bush continues, with continued progress on the Gentleman's Fancy Sock, and perhaps Canal du Midi next in the queue.

I am not a Single Sock gal, but I did learn from my recent sock profligacy that I can knit multiple sock projects simultaneously and still not suffer from serious Second Sock Syndrome. Knitting only socks for weeks, though, has got me antsy for something a little meatier. For the last few months, I have knitted socks, accessories, stash-busting design projects for Rosebud and the like, but now I am hankering for some tops and sweaters for me, maybe some lace to get me through the dog days of summer.

I started one already. I'll blog about it more this week, but for now, a little preview, Fiberlicious-style! 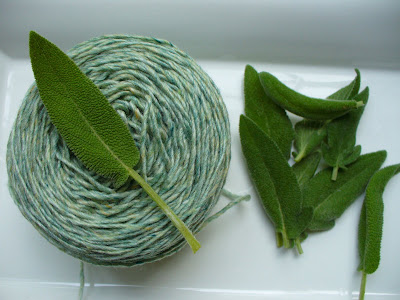 I had the exact same problem with the CFS, and I had to rip back and lengthen the heel flap too. Yours look lovely!

I've had a similar problem, of the ankle of the sock being too small, with other Nancy Bush patterns. But I have enormous feet. (size 10 1/2 ladies).

Your socks are quite lovely and the shell pattern hides most of the pooling.

Those are lovely socks! The color and the pattern compliment each other very well.

Great socks! Is this the same Tess yarn (different colorway) that I bought for socks for N at MDSW? I don't have any kind of label with my yarn ...

I can't wait to see what you do with the Green Mt. yarn! I'm still thinking about mine ...

A wonderful marriage of yarn and pattern. Lovely. And I agree that knitting multiple pairs of socks keeps things from getting boring!

The socks are really pretty - I love the color!

And that last photo - that is some purty green yarn ...

I really like these socks! It hadn't occurred to me to knit these, but I believe they're going on the list!

oh, those are beautiful socks! (and i never knit socks, so that's saying something.)

Lovely! And Thanks for the info re: heel flap. Can't wait to see what that minty goodness will become...

Sounds like you've actually knit three socks ... which is one more than a pair ... so you're ahead (karmicly speaking). :-)

I love the colour, and the pooling isn't really that bad. I wouldn't have noticed until you pointed it out.

The mint looks delicious -- both the leaves and the yarn!

Wow - I LOVE those socks!!! They are dementedly gorgeous!!!

Those are gorgeous! You are tempting me to delve into Nancy Bush Land.

So very pretty! I have small feet too so that's why I always have my daughter model the socks I knit since they often fit her feet also.

Beautiful socks! I had to look again to really see the pooling, but I am one of those odd people who doesn't mind pooling.

The green yarn looks beautiful and perfect for summer.

So pretty. I love how yours show the shell pattern a lot more than others I've seen. Beautiful!

They are so pretty, Liz!

Weird about the Tess coming off on your hands! I have never had that problem with it! I did have a slight pooling problem with my most recent pair though... I tend to buy her solids though, and they don't have the same features.

I have actually had the same problems with the ankles on Nancy's socks. Usually I just yank them over... but perhaps I should try a better method next time!