I learned to knit as a kid, but I picked up the needles for good in the late summer 6 years ago. The longer I knit, the more I like to discard knitting rules I used to make for myself. 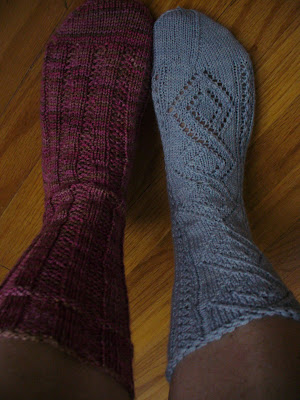 Roza's Sock in Fleece Artist Sea Wool, New England Sock in Koigu KPM
I've enjoyed my summer dalliances with both Nancy Bush and the Single Sock Liberation Movement, but its getting in the way of my overall production. The recent cool weather has me hankering for sweaters, shawls, mittens, and hats. And finished pairs of socks. So while I won't be making any more rules, I think I am going to have to renew my focus and get some projects finished.
Posted by Liz K. at 9:35 PM

'Rules' sounds harsh. Think of them as guidelines. Or something.

Those rules sound sensible. I think you should reconsider...

I'm with you! I think I've been caught up in the sock frenzy for too long! Must get back to knitting for the cooler weather.

I am on a finishing kick too. There are so many things I want to start, I fee like I have to manage the insanity that is my WIP "basket." Must finish to start...smashing socks, by the way.

The cool weather of the past few days has allowed me to wear some of my newly knit socks and shawls. Joy!
Both of your single socks are lovely!

The cool weather has had the same effect on me... I am thinking all about sweaters!

Hey, I like both of those socks! I think you should wear them together, just to worry people ...

It's funny how our moods can change with the seasons. Summer is a time for playing, and it seems that applied to your knitting. Now that the cold is starting to set in, it's time to get serious about keeping warm.

Mmm, I've had the sweater lust recently too. Now I just have to decide what to knit...
Lovely socks, both of them!

I have a hard time following any of the rules I set for myself. I buy yarn when I say I shouldn't, I cast on for too many projects then finish them all at once...Who wants to follow rules! I agree, they're more like guidelines. :)

Rules Schmules. [the backbou is just growing increasingly worried about my stash ...]

I think Jenna got it right on the mark for me: summer is a time for playing, but it's about to get colder and time to be more serious about keeping warm!

I know how you feel. I think the promise of fall has been spurring me on to complete things recently.

Hmm. I thought I left a comment already, but just wanted to check and make sure. And, no, I didn't. I'm losing my marbles.

So. Rules. Blech. Especially for knitting. Run free, and uh, knit free! But don't run or knit n*ked. You might get arrested for that.

Vive la FO! Good luck on winding up some projects before the days cool and you find yourself with a new sweater (or two) otn.

Or you could just wear them together - they look great!

dzWell, rules are meant to be broken - that is, unless they're atually laws, then it's not such a good idea . . .

I'm with you too. Along with every other bit of mojo I've lost, I've lost my knitting mojo. Must find it again soon or Ed will not have a professor sweater. Ever.

Beautiful socks. Rules are made to be bent, broken or otherwise altered. Unless they are my rules, that is. ;)