It is a good omen to start the new year with a victory, isn't it? I know this little, unassuming mass of stockinette seems like nothing much, but for me, it is wearable proof of how far I have come as a knitter. 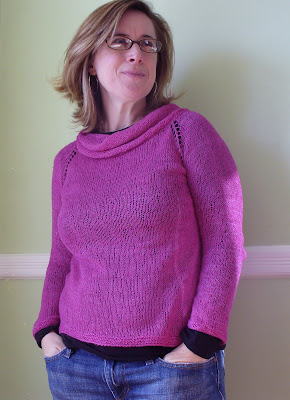 I have this commercially made sweater, a boatneck pullover knit with a fuzzy mohair-type yarn, knit at a larger gauge so that the sweater is lightweight but warm. It had seen a lot of wear for a couple of seasons, but it has gotten a bit ratty, and is ready to be retired.

Enter the Deep Breath sweater from Webs. I generally don't look too closely at their patterns, but this one caught my eye since it was for a sweater in laceweight yarn. I had never really considered using my laceweight stash to make a sweater, but I liked the idea. I could have easily purchased the pattern. It costs $1.50. Seriously. But I have, in the past, bought patterns for some top-down sweaters, and felt really suckered in the end. I know I've said it before, but I'll say it again. If you have Barbara Walker's Knitting from the Top, you do not need a pattern to make a sweater. You need a decent sized swatch, a measuring tape, and a calculator, and that is it.

So I used the measurements of my commercial sweater as my guide, and cast on. I was pleased to find as I knit the sweater that I would not need any shaping in the body, since the fabric created by knitting this yarn at this gauge (about 5 spi) is wonderfully stretchy and sexily clingy. So while I planned for no negative ease (I didn't want the fabric to stretch or look distorted over the bust), I didn't have to decrease for the waist. The fabric did all the work for me.

But when I cast off, lightly blocked and tried the thing on, the neckline was way too wide. It drooped and made the armscyes too deep. It rendered the sweater unwearable. The body fit beautifully, so I was loath to frog the whole thing, and cutting off the yoke and grafting was also a bad option in this yarn, which is a bit sticky and shows every uneven stitch.

I tried to crochet an edge at first, but it still sagged in the shoulders. So I began to pick up stitches at the neck, and experimented with necklines that would raise the entire yoke of the sweater. 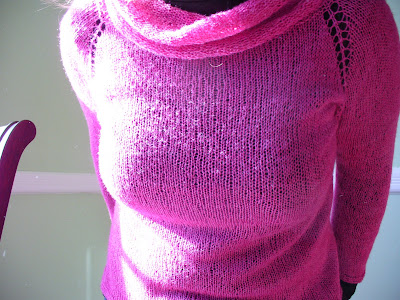 My mind eventually drifted to one of the very first sweaters I ever tried to make for myself, the Mohair Cowl Pullover from IK Winter 2004. Due to an unfortunate yarn substitution, it was also the first sweater I ever made and them immediately frogged. I referred to the instructions to make a cowl, threw in a couple of short-rows in the front to lengthen the cowl, and eventually ended up with a drapey cowl that is perfect for short-necked, graciously endowed, petite gals like me. It had the added plus of totally camouflaging the old garter-stitch neckline, and fixing the fit issues beautifully. 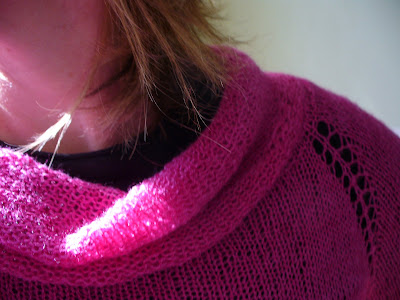 The cowl does change the overall effect of the sweater, which was intended to be a lightweight layer to wear over a tank. Now, it is cozier and looks great layered with a tissue-tee, although it isn't exactly appropriate for the arctic chill we've been experiencing. I regret using yarn-overs for my raglan increases, but I do think that they'll take the sweater into warmer seasons over the aforementioned tank.

It feels like a full-circle moment, this sweater. This is the sweater I was going for four years ago. Four years ago, there is no way I could take a swatch and a sweater in my closet and make something that fit and flattered. I could never had said things like "threw in a couple of short rows" or "I planned for no negative ease." I could never have problem solved my way out of a loser sweater into a winner. This is a great way to start the year! 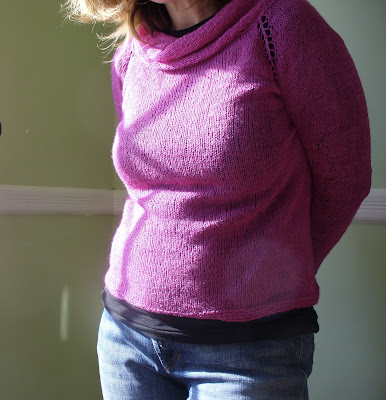 Well, I must say that this is just brilliant. For one thing, the cowl looks gorgeous and not like an afterthought at all. Second, what a great idea for using lace weight yarn. I have a big stash and already have so many shawls, so why not a light weight sweater. In fact, I have some lace weight silk purchased circa 1985 that could be ideal. Thanks for the inspiration. P.S. I like the yarnovers.

Very nice! It's almost like a graduation. Hat's off to you. May you have many more proud moments in your future.

You did such a great job, Liz! I'm proud of you and kind of envious too. I hope to learn a lot about the dynamics of knitting a really great looking sweater... I'll add it to my list of New Years resolutions.

... and adding short rows to the cowl... that really intrigues me right now because I'm about to knit a cowl on to my current WIP. Feel like sharing some wisdom with me?

You continue to inspire. :)

This sweater (an your road to making it) is all kinds of fantastic, Liz. Good job. I raise a lit lighter to you and your genius! But you know, not to close to the wool.

I love the colour and I, too, fit the physical description you gave for yourself. The sweater is great work.
Gillian

I still don't think I could use the words "short-rows" and "planning for no negative ease", so you are totally my hero. I love the cowl! What a great solution and now, if you decide to make another cowl-less sweater, you know exactly what to do!

I like it! Congratulations on figuring it all out, I'm really impressed.

You're an inspiration, Liz! Congrats on your Four Year Sweater...it looks fab on you. That color, the frothy yarn, the fit...all fab. Never would have known that the cowl wasn't part of the original pattern.

What a way to begin 2008. Call me superstitious, but I'd say it's a portent of great things to come!

I love it! Love it! Love it! It fits you absolutely perfectly and the color is just gorgeous on you! You really are a designer, not just a knitter. A designer!! Hooray for you!

liz is one hot mama in this creation!

that color looks great on you!

oh my god. you're so hot you're like a curry. i need a little bit of drums: BOOM!

Boom indeed! That link was great! I need a little electric mandolin ...

Now I know why it's the four year sweater! But it's beautiful, a gorgeous colour, sassy, sexy and such an achievement. I've run out of superlatives. Let's just agree that I like it a lot. Congratulations!

This is just beautiful Liz. The color, the cowl, the fit, and yes, the yarnovers. What an accomplishment!

Absolutely beautiful sweater. Liz, I am telling you that you need to start submitting your designs.

Liz, That's one of your most beautiful sweaters yet! I really admire your ability to design on the needles and to rethink problems until they flatter you best. You don't give up easily and relegate FOs to unwearable status. You fix them and wear them. That's being a Knitter-with-a-capital-K in my book.

DAMN! Four years? I'm so impressed you sat down to finish. It looks so nice too! It's amazing what you can do with math and patience! ;-)

(oops - late to the party, as usual.) You rock! I love how empowered you are, and you're right, that's a great way to start a new year.

Fwiw, I like that you did yarnovers for the increases - I think they're pretty and add a smidgeon of visual interest.

I LOVE it!! It is so flattering and looks like one that will be in heavy rotation. The color is great! The cowl is my favorite part. Perfect!

I love it! I thought I recognized that pattern from the Webs catalog, but wasn't so sure that I was right because of the neckline change. I really thought that was lovely in their catalog, but now that I have seen yours I think it's going to be a Must Knit.

Congratulations! A fantastic way to start 2008!

I love it, Liz. I really love it. That neckline is making my mind explode with possibilities... who knew that necklines could have such power? It looks great on you :)

Lovely sweater! Great color for you, too.

What an accomplishment! In addition to making a garment that's so technically sound, it looks fabulous - like something you can slip on and instantly feel both cozy and sexy at the same time. This is an eye-catching, lovely sweater!