I was all ready to show you my finished Sugarplum Pullover early last week, after having ripped it out all the way past the armpits. The length issue had been resolved by ripping the entire yoke and several inches of the body, and reknitting a smaller size. The yoke was still too deep; my row gauge was off for the whole sweater and since it was my first colorwork yoke, I didn't feel capable of modifying the chart enough to shorten it. Thus I chose to be satisfied with the roomy, classic sweater I made, instead of the snug, modern sweater I imagined.

I blocked it, wore it all day, and took FO shots in the backyard. But when I looked at those photos, I saw this: 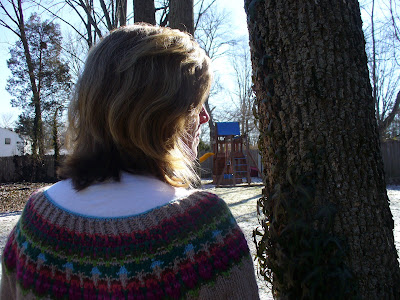 It looked terrible from the back. The neckline was too droopy and wide. A wide boatneck does not work on a roomy sweater. I am a master of convincing myself in the moment that something was good enough, but the photo did not lie. It was not good enough.

I was loath to reknit the yoke again, even though my inner knitter knew (and still knows) that I should place at least one additional decrease round within the yoke. So I ripped the neckline back, hoping that some added decreases might cinch things up enough. I was hopeful that perhaps it would even raise the neckline enough to improve the fit overall. So I decreased in the last row or two of the colorwork, and in the ribbing around the neck, and then in the last row below the cast-off. I also did a simple, standard bind-off, for one last bit of snugging.

I put it on, it fit over my head, and yes, this was a more more cinched neckline. Satisfied, I set up the camera for more FO shots, this time in the snowy backyard. And again, the photo did not lie. I had decreased way too much, and ended up with really unattractive rippling. Blocking was not going to flatten this out. I needed to rip again. 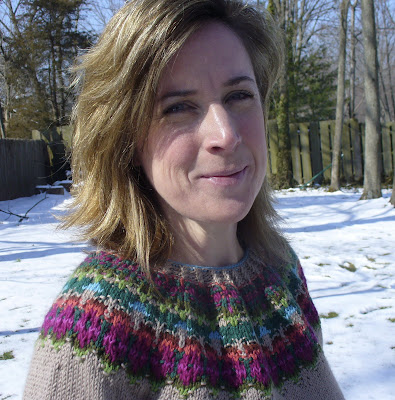 I decreased a bit more judiciously this time around, and chose to bind off in the rib pattern as well. And now, I can say, that I am, finally, satisfied with my sweater. 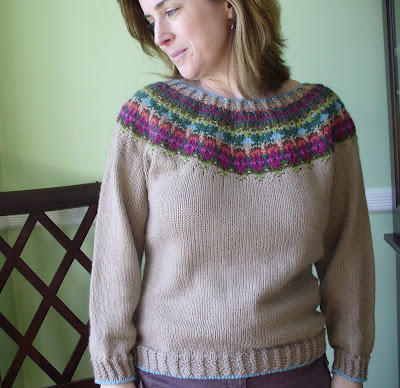 Pattern: Sugarplum Pullover (Ravelry link) by Veronik Avery from Handknit Holidays
Yarn: MC is KFI Cashmereno DK. Colorwork is mostly KnitPicks Merino Style but I also used stash where I could, including a little Lambs Pride and Naturespun.

Cashmereno is discontinued, and I think it may be one of the yarns that was caught up in the whole "cashmere content controversy" of years past. I had bought a bag on sale a couple years ago, and decided to use it against my better judgment, assuming that it would pill on the needles like its doppelganger, Debbie Bliss Cashmerino. I am glad I ignored my better judgment this time, because this yarn has held up to serious ripping and reknitting like a dream, and I have worn this sweater already a few times and have yet to see a single pill. There is a slight halo, but otherwise, it has so far held up way beyond my (admittedly very low) expectations.

I did have gauge problems with this sweater, and that is what led to my overall sizing issues. I also think the instructions on gauge are confusing in the pattern, and actually, I think there is a mistake. This pattern calls for the knitter to use three needle sizes: small for the rib, medium for the body, and large for the colorwork (assuming that colorwork tends to be tighter for most knitters. However, it recommends you get gauge in plain stockinette on the large needle the one you'd use for the yoke. I contacted the Ms. Avery, who suggested the obvious: get gauge on the medium needle, the one you'd use for the body, and she too suspects an error in the pattern. 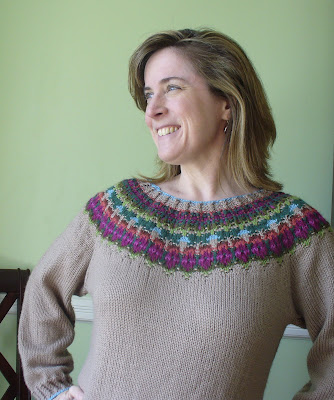 Once again, the camera does not lie. The sweater, although a bit big, is deliciously cozy, the colors are divine, and the knitter is finally satisfied with the final product! 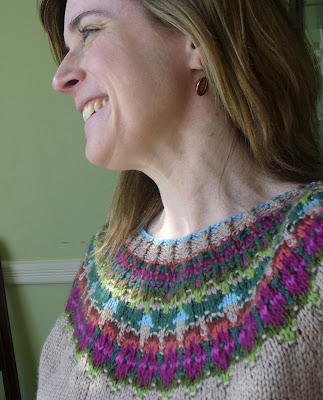 your hard work really paid off- it looks FAB! makes me want to start one!

Fabulous! It was worth doing right!

s-w-e-e-t! you look gorgeous, as always!

Thanks for sharing your trials and tribulations AND success with your Sugarplum sizing. I always learn so much in your descriptions of what goes right/wrong (if anything) with your projects.

Oh no - what a process but the end result is worth it! =)

That really was a lot of effort, Liz! But it's absolutely fabulous, and now you'll wear it all the time instead of avoiding looking at it. Congrats!!

The colors truely are perfect. And thanks for the series of photos - very helpful.

What an interesting progression. I'm glad you made the changes because the end result is beautiful! I love the combination of colors in this sweater.

You are so right - delicious and divine! The colors are wonderful - so many and yet they mesh well. That's pretty nifty that Veronik could be contacted about that!

It looks great. Well worth the effort to get it just right.

Hooray! Way to hang in there--that is one seriously beautiful yoke.

ooh, it came out absolutely gorgeous after all that work!

Hurray! I just love a happy ending! Whenever I feel grumpy about ripping out, I'll come back to this post -- because it was all worth it. The sweater is beautiful as are you!

Third time's the charm! It look great, I bet it feels wonderful, and I love the colours.

The glorious colors around your face are the focal point for this sweater. And they look just great.

Reading about your tribulations makes me think I'd want to knit that sweater top down, if I were to give it a go.

I have always wanted to knit that, yours looks great so was worth all the hard work!

Congratulations on the best possible outcome! It's a beautiful sweater, and clearly you are happy with it, which is what counts.

Well worth the hassle. Congrats for not consigning it to a hidden pile somewhere for a very long time out.

Your smile says it all! Great job on the reknitting. It looks fabulous!

Ahh - third time's a charm. It looks gorgeous, and your willingness to go back and do it right is inspiring to this extremely lazy knitter.

I made a sweater for my son out of Cashmereno a couple of years ago and it went in and out of the washer and dryer a dozen times and never pilled.

Fabu! Great job. I would have thrown it in a bag, thought about fixing it, thrown it back in the bag, hoped for moths to eat it so I wouldn't have to deal with it, and never never have put all of the work into that you did. And voila - a great sweater, truly. Congrats!

It looks really great, Liz. All the work was really worth it!

Well geez, title that one The Sweater That Made You Work. And I mean WORK. Looks like it was all worth it! I admire your tenacity!

That is beautiful! I have thought about making that several times myself... you did a GREAT JOB and I am totally impressed with your stick-to-itiveness!

Man--you look fantastic, Liz! And the sweater's pretty, too. Again, I take my hat off to a Knitter who'll reconfigure an FO until it's just right. Most excellent.

Sorry-that was me (Anonymous) above.

You, my dear, are a knitter with D-R-I-V-E! A strong, determined knitter!!

The final product looks fantastic and you look very happy with it, as well.

For the gray hairs it may have caused...thank goodness for Clairol! LOL!