We've needed some new throws and blankets around here for a while now, and I have been fully convinced that crocheting an afghan is for sure the way to go. I spend lots of time on Ravelry looking at different ones, and imagine the amazing crocheted afghans I could make. Sally tells me that crocheting is much faster than knitting, and considering the speed with which she cranks out B.A.G.S. afghans, I am apt to believe it. But Sally is primarily a crocheter who knits.

I am knitter who has extremely rudimentary crochet skills, ones useful for a knitter. I've never actually made a crocheted project. I've never followed a crochet pattern, and only know the single crochet. So while I am obsessed with ripples and Babettes, I'm just not convinced that it would be faster for me, given that I would have to learn how to crochet before I could actually begin.

My sister, the World's Most Deserving of the Handknits, recently requested something Spring-y, to go with her new Spring tote. A little flair, and little green, a little scarf-ish accessory to brighten up an otherwise mostly neutral wardrobe. Enter the perfect excuse to practice my crochet skills, and to test my afghan hypothesis: is crochet really faster than knitting, even when you don't really know how to crochet? 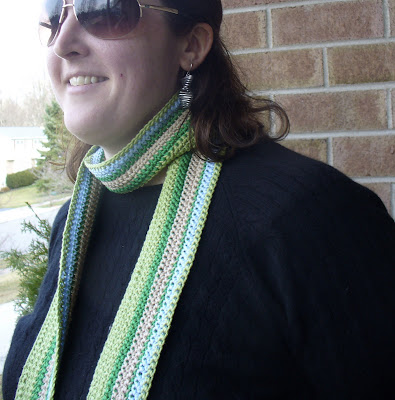 Knitters know that scarves can be a slog, but I cranked out this scarf in less than a week, and that's with some serious ripping after a too-tight chain row caused the scarf to twist and ruffle. I used the Stripes and Stripes Forever (Rav link) pattern from the Happy Hooker, but if you know how to single crochet and have a few skeins of Tahki Cotton Classic lying around, you could make this scarf without a pattern. 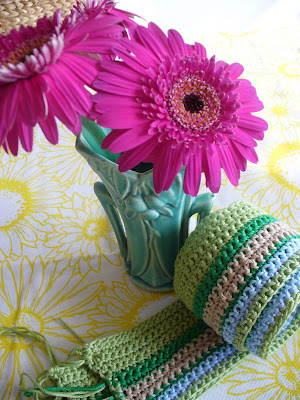 My tension is still not great, I have no idea how to properly finish, I lose and gain stitches easily, but in all, a fine first effort. Only about a zillion more rows, and I would have made a great afghan!
Posted by Liz K. at 4:56 PM

Cute scarf! You've arrived at the dark side!!!

I really like the colors, very springy indeed! You know, I know how to single crochet and I have made a small throw (which I love) but I can't read a crochet pattern to save my life. Maybe I will get the Happy Hooker book. You may be doing ripples and Babettes yet!

I started out as a hooker ;-) but haven't gone back since I picked up the sticks. I have to say though that my house is filled with crocheted afghans. Some were passed down and some were thrifted and I love them all.

Thanks for the shout-out Lizzie! ;o)

I love that scarf. So pretty. And I swear, once you learn to double crochet, you can crank out a blankie in no time flat.

Crochet. Is. Fast. AND pretty when made into a spring scarf! Great job. I bet you'll be Babette-ing your heart out in no time. Or maybe amigurumi-ing?

I totally agree, crochet is faster than knitting, and I too and a knitter who daubles a little in crochet. Last year I crocheted a baby blanket in about 12 days, and that was after I crocheted half of it only to find out that I had been some how adding stitches along the edges. So technically I could have finished it in about 6 days. I am still a knitter, but I do like a crochet project every now and then.

I love the pretty scarf. Too bad I can't crochet worth a darn!

This is a piece of flair I love to wear. The compliments from others are as cheerful as the scarf is pretty. Thanks sis!

Wow! I am comfortable using the hook for cast-ons, edging, and embellishments but crocheting a scarf makes me very nervous! I'm really impressed -- it looks great!

i love that! so simple but really stylish.