How do you thank someone for rescuing you from the blue screen of death? Why, knit him a blue swirl cap! This was a quick knit for Jorge while he was retrieving data and upgrading our hard drive. He deserves much, much more. 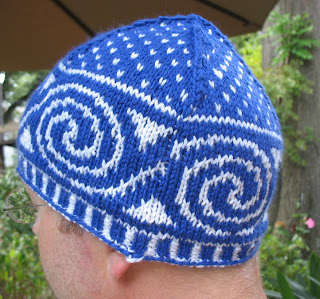 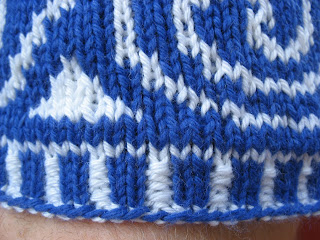 Notes: This is an adult medium cap -- not quite covering the ears. I cast on 120 sts using a 2 color long-tail CO method. I think the effect of the 2 color CO might be lost due to some curling at the bottom, but I do so love this CO. Here is a video tutorial for all those who don't already know this CO. It includes instructions for a rather clever braid as well. 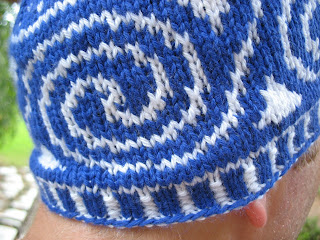 I then proceeded to work 5 repeats of rows 5 through 29 this spiral chart followed by knitting 1 round MC. (If you use the spiral chart, the brown squares are CC, the white are MC.)

I didn't want to end the colorwork there, so I continued with ... are you ready for this? ... a "lice" pattern for the top of the head. Appropriate for XRK, no? The pattern is simple and I wanted to start my crown decreasing in the 3rd row of the pattern. So the crown looks something like this (white squares are CC, grey squares are MC): 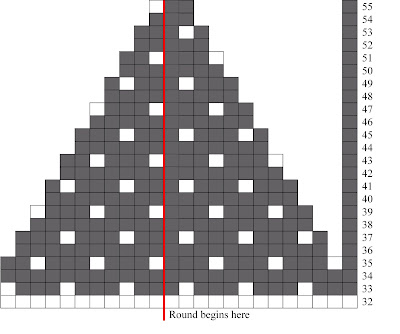 For the double decrease, I used sl2tog, k1, psso. Therefore, round 36 would read as follows:
Knit 10; slip 2 stitches together knitwise, knit 1, pass slipped stitches over; knit 11. 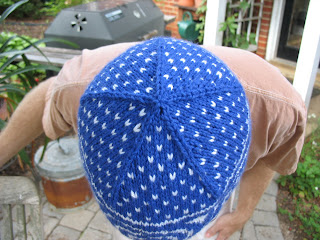 Round 56 is k2tog all around.
I don't always like colorwork in DK weight, preferring sportweight or sockweight yarns, but the softness of the yarns and the quickness of the project won me over! 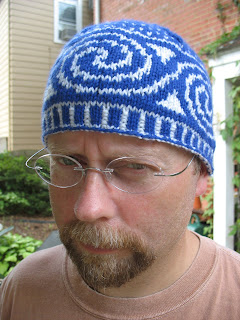 The Backbou as a reluctant model.

I love that hat! You really did a great job.

That last picture is priceless ...

awwwww, the backbou is such a cute model!

but you can tell he was gettin' impatient toward the end...

That is an amazing gift! I think he will like it!

I'm so glad that I'm on a Mac and don't have to deal with that awful blue screen of death!

I love this hat, with the exception of the lice pattern. Boo, lice.

The hat looks great, Ann! Nice designing on the fly!

I really like this pattern! It's going in my 'maybe someday' pile for when I get over my fear of colourwork.

And exactly the same colour as the blue screen of death too!