Stick With Me Here

I owe an apology to all those who generously contributed their time and efforts to the Nepal project, because my ambivalence about this blog left you all unthanked. I regret not having photographed the giant box of handknits that got shipped to Nepal, but I did manage to count all the items. The final tally was 78 hats,13 pairs of socks, 8 pairs of mittens, 6 scarves, 5 sweaters, and 2 blankets. I was touched by the generosity of my friends and by the contributions of strangers who sent the most beautiful hand made items. I heard this week from my friend in Nepal who said that he "passed the knitted things on to two children's homes and a poor family. There was great appreciation and gratitude. The clothes really are needed and the people are happy to have such beautiful, warm things. Thanks so much for your hard work...!" So again, I thank you for contributing so generously for the people in Nepal. Your efforts are sincerely appreciated.
With that out of the way, I struggle with the status of our humble blog. I still knit a lot, but don't care to think and write in depth about it. I think most agree that knit blogging has run its course, thanks to Ravelry and, to a lesser extent, Flickr. I know that I have said all I have to say about the genius of Elizabeth Zimmerman, or how much I like to knit with handspun yarn. Does anyone need another post about the satisfaction of using your scraps? I don't want to make deep observations about how my knitting is a metaphor for life; I'm happy to just enter notes and modifications into my Ravelry project page. I like knitting, and I do like writing, but I don't much want to write about knitting anymore.
But I cannot bring myself to just abandon the blog. I like that we still have this project together, almost 5 years since I moved away. I like to see the things you knit, and I like having my little space to share the things I make with the readers who have not yet deleted us from their GoogleReaders. So while I cannot bring myself to just quit our blog altogether, I won't be carefully photographing and documenting each pair of socks or mittens that I make anymore. But I did just finish a project that made me want to pull out the P & S and share with my knitting friends. In fact, this project was epic, and I did learn a thing or two as a novice crocheter, some lessons to be shared with the ever-shrinking knitblogging world.
My daughter needed a bedspread, and despite having made a few trips to the Big Box Stores, she did not find anything to her liking. What she wanted, she told me, was "rainbow stripes." I immediately decided that I would crochet her a ripple bedspread, using the crapload of Tahki Cotton Classic that I had hoarded acquired through those irresistible closeout grab bags at Webs.
This seemed like a perfect project; I had the yarn already and crochet was fast, so I would whip up the blanket it no time at all. But in reality, I was making a queen-sized bedspread using dk weight cotton yarn and an F hook. This was insanity. A blanket should be made in a heavier gauge yarn and a bigger hook if you actually want to ever finish it. But what else was I going to do with 30+ skeins of totally unmatched, mostly discontinued colorways of TCC but make a crazy ripple blanket for my little girl who asked for rainbow stripes? Why should I buy blanket-quantities of yarn when I had plenty?
Thus I began this ill-conceived, slightly delusional course of making a Very Large Blanket with Thin Yarn and Small Stitches by choosing Attic 24's excellent ripple pattern after struggling through a few others. As a crochet novice, I don't really know how to properly swatch for a crochet project, so I decided that I would wantonly chain a bunch of stitches, make a few stripes and test the size by laying it across the bed to see if it fit. That plan worked, but in my haste, I failed to consider how much yarn I used in each ripple, and several stripes into the blanket, I actually weighed a skein of leftover yarn and learned that each stripe took about 28 grams of yarn or just OVER a half a skein. I could only get one stripe per skein of yarn. My crapload of yarn would only get me about halfway there. 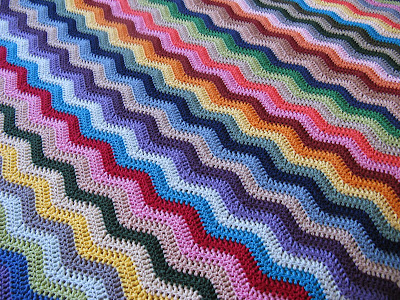 At that point, I had two choices: buy more yarn, or start over, making a slightly narrower bedspread. I ended up with choice number one and bought more yarn. I bought more TCC and supplemented with Online Clip, which had better yardage for the price (although it was awfully splitty, and I didn't enjoy crocheting with it) and some Elann Sonata leftover from previous projects. And really, in the end, I am glad I kept it generously sized, because the last thing anyone wants is a blanket that is a little too narrow or a little too short. 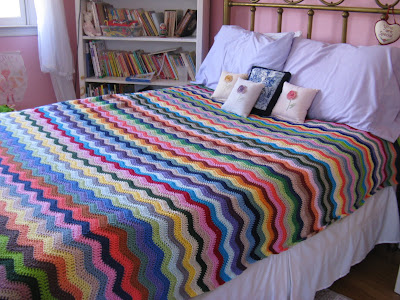 The blanket took the better part of a year to complete. I started it last Spring, put it away over the summer, and worked on it periodically in the Fall. I decided to focus on it in earnest after the Nepal project was complete, and finished it at the beginning of March. There are 84 ripples, each one took about an hour to complete and I used almost 50 skeins of yarn. 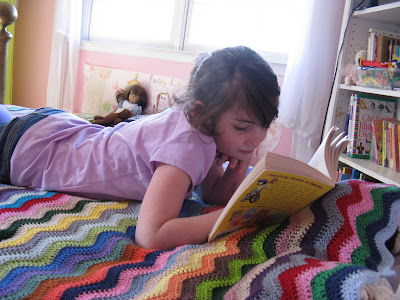 This thing is a stunner. I absolutely love it, and so does my daughter, who got her rainbow stripes. It is perfect for her: colorful, unique and whimsical. As Someone Who Makes Things, I am gratified that my daughter sleeps under something I made just for her, and I do hope she cherishes it for many years, long past the age when she prefers tasteful neutrals over rainbow stripes.
And I am glad we still have this blog hanging around so I could share this little piece of insanity with you.
Posted by Liz K. at 10:14 AM

Thank you for doing Project Nepal. I'm glad to hear the items have made their way to people who can use them!

I don't agree that knit blogging has run its course, though. In fact, I heard about Project Nepal on a blog, not on Ravelry. I read lots of knitting blogs regularly. So hang in there! Without your blog and Project Nepal, there would be some families and children with colds hands, heads, and feet.

Oh. Liz. WOW. Annie is going to treasure that blanket. It will wrap so many future generations in warmth, cheerfulness, and love. It's gorgeous!! That's a lot of time invested, and it was worth it!

I wish I could say that I have been knitting up a storm but just not posting. But that would be a lie! I'm still working on my Ravelympics sweater. Soon, soon.

it looks GREAT in person, but even BETTER on the bed!

and is rosebud growing up, or what?

That blanket is a stunner! I'm suddenly feeling the urge to make one myself. (If I start now, I should be done by the time my 3-month-old is in a real bed, right?)

So beautiful! Thank you for sharing. I still enjoy reading blogs and will continue to look for posts here - even if they are sporadic.

Stunning blanket. She will treasure it for decades, I'm sure! What a special thing.

Beautiful blanket! And what commitment! Thanks for sharing.

I lurk, mostly... but have been seeing similar comments in a few places. "Ravelry killed knitting blogs", and I too have to disagree... Ravelry forums are cumbersome (like most forums) and take up way too much time to scan and read. They don't allow for the flexibility a blog does, and they certainly don't allow for the nice large photos I personally enjoy. Some of it is personal preference, for sure, but to me reading blogs is the same as reading a magazine (leisurely, calm, fun), whereas Ravelry and other forums are... work. I guess some people enjoy the whole social networking thing, but I'd rather sit quietly with a magazine (or blog) on quiet times, and spend the social time being actually social in non-virtual time.
I hope you - and others - keep blogging!

That is a beautiful blanket! Well worth the trouble. I still have blankets my Grandmother made for me. More than likely, your daughter will have that blanket when her kids are born too.

I too am having trouble finding words to write on my blog and like you am reluctant to let it go. I love how I can go back and see my daughter go up and now my son.

I am keeping it up, but only posting once in a while and not always about knitting. Maybe someday, inspiration will return for both of us.

Your blanket is a gem, I so much love your colours. I came here via Ravelry and wanted to read your post about the making of in any case. At the moment I am planning to make a ripple, too, I have a large stash of cotton yarn in many many colours and wanted to use it with no special colour combination in mind. What impressed me most in your blanket is, that you´ve used dark colours, too, like navy and this looks so very good, makes the blanket more 'lifely' (can´t find a better word in English, sorry). I have a lot of bright colours, but no dark colours and thought I would include some stripes of white, which I need to buy then. But now I am really pondering about buying some dark colours instead and I thank you so very much for this inspiration. I am completely in love with your blanket! (And also what you´ve written about knitting blogs)
With my best wishes,
Suzi

You could always write about your process of learning, say, quilting?

I think the blanket it beautiful, you are beautiful, and I am glad to read your words whenever (and wherever) you choose to write them.

That is the most beautiful blanket. Your project has inspired me because I'm finding myself in a very similar situation right now - I have a TON of light-weight cotton yarn in a beautiful array of colors just waiting to be made into a simple ripple blanket. However, the concept of using a tiny crochet hook to make it seems really daunting - and I was only thinking of a baby blanket! I'm encouraged to start the project now that I've seen how fantastic the end result could be.

That blanket is just wonderful.

Your blanket is AMAZING!!!