Well, at about 10pm last night, after remarking to the BackBou about how easy this cable sweater was going, I found this (dum dum dum -- that's evil, ominous music) ...

Ack! The Wrong Cable. (Almost as terrifying as The Wrong Trousers.) Do I leave it in? and then this would become that dreaded big mistake that I point out whenever someone compliments the sweater. Or do I jump in the frog pond? Not a terrible idea, I wouldn't mind knitting the 9 rows again, but it would be disappointing. Or ... do I selectively rip out only some stitches to rework the cable and then weave it back up again? I have never done this before (is there a name for this?) except reworking some knits and purls just one row down. I wanted to do this. But I cleverly went to sleep instead. I thought that maybe in the morning I would just visit my LYS and have someone else do it (I would bring chocolate).

Instead, in the morning I decided to try reworking the cable without frogging by myself. Worst case scenario, I would have to frog the rows back and reknit, something I could live with.

Here I am beginning to unravel ... literally and figuratively. 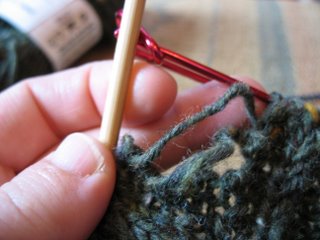 Why I decided to begin this while the BackBou was out on his run and the kids were all over me, I'll never know. I then exposed the offending stitches. 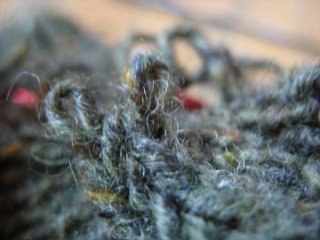 I reworked the cable and was feeling pretty durn smug. 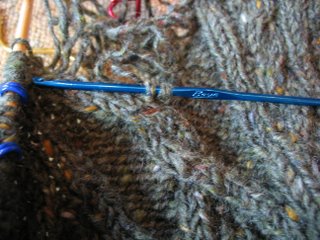 And then I started picking up stitches. There are no pictures of this. Because it got ugly. I got ugly. I got very confused about what was a stitch and what wasn't. The seed stitch in the middle of the diamond was awful. The right slant of the cable was even worse. Where were all those stitches? Why are my fingers growing bigger and bigger? Why did I have children around me? Why did I ever have children?

I finally got back to my starting point (with a new-found appreciation of the crochet hook) ... with 4 extra stitches. WHAT? How the hell did that happen? I guess in my ugly confusion state I was just picking up anything that looked like a live stitch. Anyhoo, I did some k2tog and ssk and ... Voila! 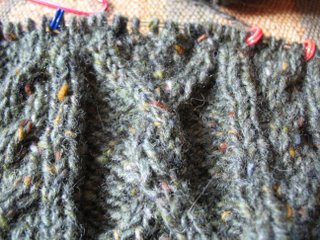 Now let's be a bit more careful next time, shall we?

Despite all your trauma you actually did know what you were doing! Ya Hoo fo you!

I was biting my nails the whole time that I was reading your post ;-) Well Done!

You are definitely the cable master!

re. your question -- I think the term is 'zippering down.' don't this kind of thing make you just wanna hurl?
Brave woman.

How goes the 1st grade? I miss Miss Debbie.