This might be the first meme ever on XRK, but since my WIPs are sort of boring right now...

Ann and Mo might know many of these things, but the readers won't.

1. My mom's best friend Mary Ellen taught me to knit when I was in 4th grade. I still have the needles she loaned me then, and she still nags me about it. I used the same needles when I started to teach Rosebud to knit. Mary Ellen and I still talk knitting and go to yarn shops together.

2. I was a member of the Knitting Club in high school. Sister Sallie was the club leader, and we were to knit in total silence. It wasn't fun, but I stuck with it, because I really liked knitting, even though all I could make were long rectangular schmattes. But to her credit, the late Sister Sallie taught me to bind off.

3. It was Mo who inspired me to knit again and really learn how to do more than knit and purl. I'll never forget the playgroup in her old house, when she debuted Miss Priss's pink poncho, and proudly but humbly declared that she made it. By the next day, I was at the big-box-craft-o-rama buying the "I Taught Myself Knitting" book. 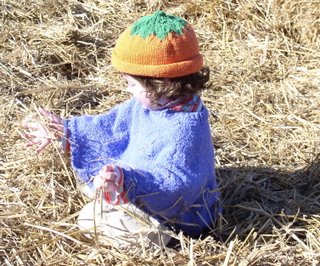 Two of my beginning knits, c. 2003 -- a pumpkin hat and a blue poncho for Rosebud, inspired by Mo's.
4. The first thing I knit was a squeaky acrylic lavender baby sweater for Rosebud. It was so thick and stiff that it wouldn't fold. I think I threw it out. My second sweater was an intarsia baby sweater in Mission Falls 1824 cotton, recommended by Stewart, when she worked at the Knitting Basket. I frogged that one.

5. I will not knit intarsia ever again. After mutliple tried, my intarsia still looks horrible, and all those ends...yucky. And I don't like the effect enough to make it worth it.

6. I rarely knit with the same yarn twice. Every new project is a chance to try a new yarn. I feel like I haven't knit enough in the last 5 years to have favorites, and most yarns have something to love. Frankly, I'm just not that picky.

7. I try to knit something for Mr. S once a year. So far, he has felted slippers, a DNA scarf, and the Sasquatch socks. I know that there are a few years missing in there. I said "I try..." Next on the agenda, a sweater. I am scared to even start it.

8. I used to knit mostly gifts. I felt like, during those lean years, that I needed to justify my craft by making gifts for others. I have gotten over that.

9. I'm a thrower, but can knit continental.

10. Until we began blogging, I didn't really have a way to organize and chronicle my knitting progress. I tried journals and files and notebooks. Blogging just seemed to work as a means of keeping track of my knitting. And now, it has become a wonderful community with friends and inspiration and ideas.

Ann and Mo, I'd love to learn some more knitterly things about you. I miss you both so much. And XRK readers, consider yourself tagged.
Posted by Liz K. at 9:10 AM

Woohoo! I am the first to comment! So 10 Kntterly things about me....

1. I was taught how to knit when I was 9 by my babysitter, and remember giving up because of all the mistakes I made.

2. In 4th grade home ec, we learned how to crochet, and everyone in my family got a scarf. I even made a scarf for my cabage patch doll, Rachel.

3. Years passed without picking up needles again. Then when my future mother-in-law made me a fun fur scarf (I know all you women out there have made at least one!), I asked her to teach me to knit again. Needless to say, I made a fur scarf for everyone of my little cousins. (Do you see a pattern here...)

4. All of sudden, my brother tells me I am going to become an aunt, and I quickly take a class to learn how to crochet my nephew a baby blanket (notice no scarf this time).

5. I also throw, but I keep struggling to teach myself how to knit continental.

6. Most of the things that I have knitted in the past have been gifts for people.

7. I have a weakness for sale yarn that does not have a purpose nor pattern associated, yet, but I eventually figure it out.

8. When it comes to knitting for myself, the yarn has a habit of collecting dust. Not my fault dust loves my yarn! :)

9. I love hanging with our knitting group because we inspire each other to become better knitters and knit things that we would be afraid to even attempt ourselves.

10. I am glad that I have met my new knitting friends, which have introduced me to the world of blogging. Soon I can get a blog of my own going.

So you'll be seeing this meme on my blog very soon. BTW, what does meme mean, anyways? And I agree with Aileen, I love our knitting group, and it does inspire me to try new things.

I'm working on mine. It's not easy when you blab the majority of your knitting life on your blog.

(from an idea by grumperina; apologies to all y’all who know my tale of woe already)

1. I was taught how to knit when I was 13 by my maternal grandmother; I gave it up cause it wasn’t cool back in the day.

2. years passed without picking up needles again, until I turned 27. I still have the first garment I made: a red heart super saver shrug in a double moss stitch pattern in a very ugly shade of blue.

3. years passed without picking up needles again, until I turned 46. my life was going down the tubes. my psychologist brought out the long-dormant talent. fun fur (ugh!) made its debut; I got hooked (needled?). I now have an addiction for which there is no cure (short of cutting off my hands).

4. In 2004 I decided to become a certified knitting teacher via the CYCA (craft yarn council of america). I received my certificate in december of that year ($60 and 11 months of homework swatches, 2 oral exams, and an original design knitted and submitted for critique). I enjoy teaching others how to create art from two sticks and some string (but NO fun fur!).

5. I throw; I have no desire to learn how to knit continental.

6. I have no desire to learn how to knit socks. most of the things I knit are gifts for others/charity projects. I DO like designing my own artworks.

7. I am a published author: Annie Modesitt’s book “Cheaper Than Therapy” contains a poem I wrote.

8. I have no desire to use the intarsia/fair isle techniques in my designs. I want to learn how to incorporate mosaic knitting, illusion (or shadow) knitting, mitered squares (thanks, aileen!), and modular knitting into my sweaters.

9. I founded the montco sit-n-knit group in 2003 cause there were no local groups near me back then (if it’s going to be, it’s up to me). I am VERY fortunate to lead a group of 27 diverse, spirited, like-minded artists down the yarn road (thanks for the props!).

10. when I shop for yarn, it’s with a specific project in mind (I don’t have room for a stash). each project has its own bag that calls out to me like a siren each time I enter “my sacred art room”. I have 15 bags tempting/taunting me right now...

haha, italian grandma...?! really? funny, aren't they, the reasons we choose to knit or not to knit something?

1. i love knitting socks and have a weakness for sock yarn. (duh)

2. my grandmother introduced me to knitting when i spent a week with her in georgia before my junior year of high school. she gave me all kinds of acrylic yarn and 10" boye straight needles. i forgot what she taught me and never picked it up again. also, i lost one of the needles so i was stuck, anyway.

3. i used to go to Honolulu SnB meetings, but i just don't have time. the locations are always changing, too, so that doesn't help.

4. i was really good at keeping track of my yarn stash and needles. i am not so good now. i have no idea how many sets of sock needles i have or what yarn i've bought in the past year.

5. i used to think it was ridiculous of me to spend so much money on sock yarn, only to end up giving it away in contests or swaps. however, the amount in karma and unexpected yarny goodness from knit blogging friends that i receive over the course of time more than makes up for what i spent in dollars.

7. i've only made one sweater ever (so far). and it was in bulky weight yarn. i used to wear it a lot, and then i stopped because it currently is the only sweater i've ever made. i think when i make more sweaters, i'll start wearing it again in rotation.

8. i bought my sewing machine and wanted to learn how to sew because i wanted to make those cute project bags for my socks.

9. i once knit two socks at a time, one inside the other. i think i would've liked it more if i had used wool instead of cascade fixation. i think it will be a long time before i try that again.

10. i have knitting spurts. sometimes i feel like i never finish anything, and then i go through periods where i finish a bunch of things all at once. some may call it small effort accumulating over time; i like to think of it more as frog deterrent behavior. i hate frogging.