At various times in my life, usually after I have been feeling grounded and centered for a while, I have a hard time saying "no" to people. I then tend to take on too many responsibilities/obligations and thus lose the aforementioned centeredness and balance. This is usually followed by a period of stress and then much use of the "no" word.

At the beginning of the summer, after the craziness of the end of school died down, I said "yes" to many things. One of which was to teach a knitting class for kids at the pool. I really wanted to help raise some funds for the pool and well, to be honest, I wanted to indoctrinate more children into the world of knitting. You know, assimilate the masses ...

Soon after I committed to doing this, I began to freak out. I couldn't even teach my own children to knit! What on earth will they knit? Who on earth will want to come? What if they hate me? What will I do with my children? What was I thinking? Maybe my previous experience working with children was a fluke and I'm really terrible with children and a horrid misanthrope! I should have said "no!" Augh!

And then about 3 weeks before the class was to begin, I found this book. 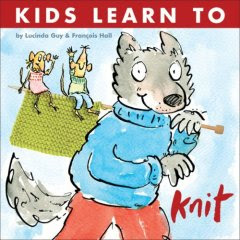 I really loved it. I found it here and as far as beginner knitting books for kids go, it's realistic and fun. The instructions are well-illustrated and the projects are simple enough for the children to be successful in a short amount of time. I had 3 sessions. One and a half hours each session. 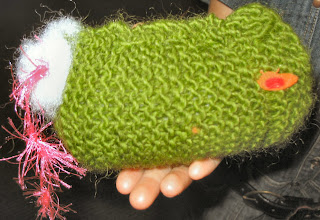 One child found that she did not like to knit, but she loved fingerknitting and the finishing work of sewing, stuffing, and decorating. I knit most of her doggie for her after she knit two rows. She still had a wonderful time seaming and cutting felt. 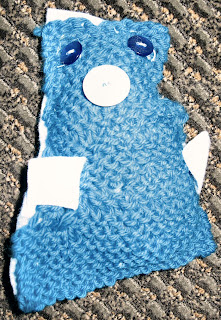 Another was a great knitter but worried about mistakes. We re-conceptualized her "dog" into a seal and she then realized how these knitting "mistakes" are truly opportunities for individual design elements. She was proud of herself. 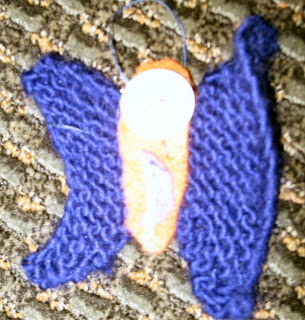 The third girl was an intuitive, talented knitter before she ever came to the class. She knew how to cast on, bind off, knit, and purl. I taught her increasing and decreasing and how to read a basic pattern. She wound yarn by hand and with my swift and winder. When I was using a three way bind off to work on a different project, she rushed to my side to see how to do it. She wanted to know all the different ways to increase and decrease not just the simplest. And when I brought lots of different stash yarn to show them the variety of fibers, she picked up some roving and without thinking, twisted it in her fingers and murmured, "I'm making yarn ..."

The force is strong in this one.

The kicker of it all is that while I was teaching these three very sweet girls, my two girls were helping. I couldn't believe it, but these children who had been bickering, whining, and generally driving me nuts for a good part of the summer were the best little assistants I could have ever wanted. N, who thanks to the wonderful Miss Martha and an excellent Waldorf handwork curriculum, learned to knit two years ago helped to correct mistakes and taught everyone how to fingerknit. R, who has had no interest in knitting previously, began knitting and helped to cut felt and pick out buttons. They were brilliant!

Maybe I should have said "no." But it was a great experience in the end despite my freak out beforehand. In fact, I am feeling quite balanced and grounded about the whole thing ... just in time for the start of school. And you know what the start of school brings: lots of opportunities to say ... "maybe?"

Hooray! I'm glad it all worked out well for you. What a happy story. :-)

Sometimes we have to push ourselves a little. I'm glad you got past your freak out so that you could have this great experience.

I'm glad it went so well, though maybe not exactly how you had planned. Isn't that usually the way? :)
Stewart

I would say both you and your girls learned as much from this class as you taught the others.

life is funny that way sometimes.

This sounds like it was a good experience for everyone - and whether or not they continue to knit, they have positive associations with it. Congratulations!

Food for thought as I contemplate ways of getting more involved in school while still maintaining some level of sanity in my life, much less make time for knitting.

It sounds like a wonderful experience -- and something those girls won't forget anytime soon.

Sounds like a lot of fun! And I'll have to remember that book!

Oh, I think you had a great time (as did the kids). My favorite times are the great times that should have been "no's," but I am all about the "maybe" these days!

Good for you! I'll have to find this book!