My last pair of socks were a disappointment, so I was in need of some sock redemption. I wanted to knit a pair of red socks in honor of Project Spectrum 3.0, and with MDSW only a month and a half away, and I've been feeling the pressure to knit more of the yarn I bought there last year.

I chose Spirit Trail Fiberworks Brigit in a beautiful burgundy semi-solid, and once I learned from their website that Brigit is the "Celtic goddess of fire, illumination and guardian of bards, associated with handcrafts of all kinds, creative muse," I knew I had unwittingly stumbled on the perfect MDSW purchase with which to celebrate the Fire element. Combined with the super-simple Nutkin pattern, I have achieved sock redemption. 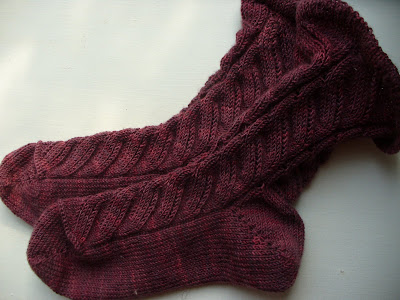 Red is a bitch to photograph, but this represents the color best
I would encourage anyone to knit the Nutkin socks; they should be the next Monkeys. The simple lace pattern is easy to memorize, but makes for a dramatic effect. It does bias a bit on the leg, but I haven't found it to be uncomfortable. Also, the pattern calls for a YO short row heel, and while I usually choose a heel flap, I tried the heel as described in the pattern, and for the first time ever, I managed a short row heel without holes. Call this a strong recommendation for a easy yet dramatic pattern that teaches you a new technique.

I'm sure many knitters are beginning to consider their MDSW 2008 purchases, and I would recommend this yarn as well. It is a superwash merino, with no nylon, but the tight twist makes it feel more durable than I would expect. The colors are rich and deeply saturated, and the yardage is great as well. Spend some time exploring their website; while the photographs so not do this yarn justice at all, learning about their mission to protect endangered and rare species of sheep convinced me that this is one yarn vendor I want to support. I have another skein of their Elizabeth I in the stash from last year, and will make it a point to stop by their booth again this year to try out a few more of their yarns. 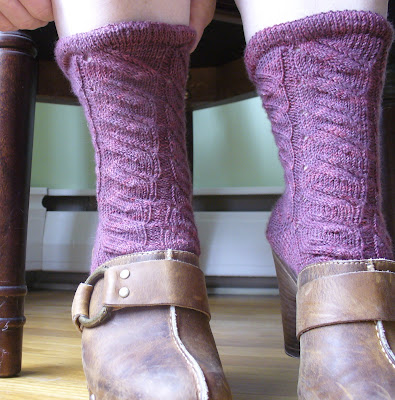 I'm way behind on my blogging; expect a parade of FO posts this week if I actually get around to blogging.
Posted by Liz K. at 4:33 PM

They're so pretty! I like the pattern, but the yarn color is awesome.

I will certainly buy more of this yarn at MDSW and I will most certainly knit these socks! They are beautiful!

Love your socks! That pattern has been on my Ravelry queue for a while now. One of these days I'll cast on :-)

Those are so cute!

Ah, redemptions is sweet. Gorgeous socks in a fantastic colour!

Wow - why don't you just knock out a pair of gorgeous socks in a heartbeat? Jennifer's yarn is a dream to knit with, and she's a great gal as well, so I'm glad you're supporting her!

Lovely socks! And they look really warm too (just in time for Spring, of course).

MDSW is a month and a half away? Yikes!

I forgot to say love the color and bring on the FOs!

Very pretty! I really like the nutkin pattern but I'd been hesitating because I had worried about the bias with the pattern but it doesn't look bad at all!

these are so pretty!

Socks are gorgeous!!! That pattern is beautiful. Good choice. Hey... those clogs are nice! Can you tell me what brand they are and maybe where you got them? I like!