I finished my CPH Monday evening. The temperature was 80 degrees upstairs in the study. I didn't even want to try it on; I certainly didn't take any pictures. I just wanted to get the pile of wool off my lap.

Today it's a cool, overcast day. A great day to wear the Hoodie on R's Spring Walk by the river. I received lots of compliments on the sweater (mostly because everyone else was shivering in shorts and t-shirts, but also because I ran around telling everyone "I made this, isn't it great?"). 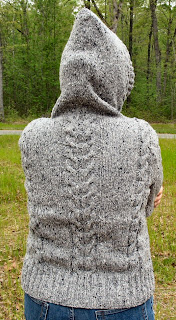 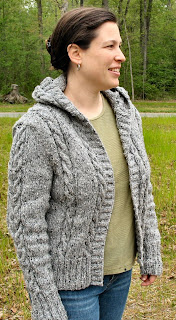 Pattern: Central Park Hoodie by Heather Lodinsky from Knit Scene, Fall 2006
Yarn: Maggi's Aran Tweed, color 03. I used 13 balls (50g, about 100 yds a ball)
Needles: US 5s and US 7s
Modifications: I was worried about the tightness on the arms as I knit the sleeves, so I increased every 8 rows, 6 times and then every 4 rows, 5 times. If this sweater hadn't been so chunky, the strange rate of increasing would have been bad, but it turns out to not be noticeable. I don't think the sleeves would have been too tight if I had followed the pattern. Not being on the slim side, I knit the 44" size and it seems to be just right. I have not blocked it yet, but I will. Maybe. After the weather warms up.

I joined the shoulder seams with a 3-needle bind-off, but didn't do short-row shaping for the back. I should have followed Liz's advice, but it was too late! I simple stuck the stitches on a holder instead of binding off. It worked out just fine. If I knit this again, I would do a 3-needle bind-off on the hood before the ribbed band and then knit the border all in one piece to avoid the join at the top of the hood. Lynda details this here.

No buttons. I may do clasps later. I may not. I kind of like it just open like this.

The yarn: I like wearing the yarn. I did not always enjoy knitting it. It breaks easily when seaming and at random inconvenient moments when knitting which I find very irritating. Its nubby habit is quite nice visually, but does not always allow for the best flow while knitting. I have 7 skeins left so I'll knit again with this yarn, but I need a break for now.

Fabulous! Love the color and texture of the yarn!

lovely! It looks so cozy, and perfect for an overcast day.

It is gorgeous, and you, my friend, look fantastic. What a bummer about that yarn breaking...

I love it Ann! The fit is really great and I love the color.

What a great sweater! I love the supermodel picture of you looking off into the distance. Very pretty.

very nice! glad you had something to keep you warm today! (and way to go totally rocking the knit-bragging!)

and i know everyone replied "YES! it IS great!" because it totally is. nice job!

Gorgeous! It looks great on you. I really like the color.

That is a great looking hoodie! Have you thought about those short pointy chopstick kind of things to close it? (or are you like me and you would damage yourself?)

now you and mo and liz can get together and take a pix of all y'all & the hoodies.

how cute would THAT be!

I love the pointed hood! (Not that it's excessively pointy, just pointy enough to be cute.)

It's fabulous! The color is great and it fits you perfectly. Awesome job.

It's as if the weather knew you would want to model your handknit! :) It is beautiful! Love the tweed!

Yes! It is great! I love the color! I worried about not having enough cool days left when I finished my CPH, but, wow, I was wrong. I've worn it plenty.

You deserve to brag about it! It looks great!

Thanks for playing my critter contest (winner announced monday)...funny about your sea monkeys!