A Spartan, Some Socks, and a Pleasant Surprise

A Spartan
So the Spartan was finished about a week ago -- only 3 months late for Valentine's Day! Well, we can't all be timely now, can we? 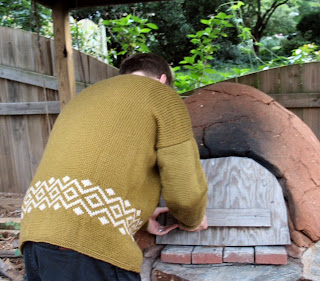 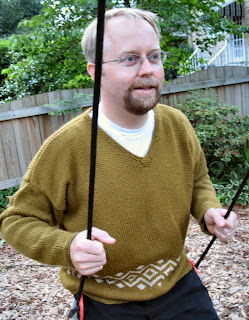 Pattern: Spartan Pullover, Interweave Knits, Fall 2006
Yarn: Mission Falls 1824 Wool (colorway 14), 13 skeins; O-Wool Classic (crap. I lost the ball band. I used one skein and it's the off-white kind ... here it is, Oatmeal)
Needles: US 7s and 9s
Modifications and Notes: I did a lot of messing with the numbers in order to use this yarn (I got 5st/in instead of 3.5st/in). Some things worked, some didn't.

What worked: I knit for the smaller size (41 3/4") but altered where needed for the BackBou. I used Anne Budd's sleeve formula from her sweater book instead of the pattern's sleeves, just because it seemed easier to work the increases properly. I used O-Wool for the contrast yarn and although it wasn't a perfect pairing, I think it looks good.

What didn't work: My increasing for the colorwork was not enough and the sweater sustained some puckering. 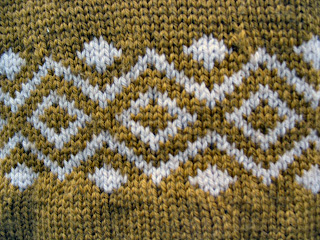 Here is a detail of the puckering. Now, I think it's not that noticeable when the BackBou is wearing it, so I didn't stress about it. Blocking really made a tremendous difference.

Another snag in the sweater process was the yarn supply. I have no idea where my head was when I began knitting this sweater thinking that I had enough yarn. I was 4 skeins short. And then I tried to order more. I thought I failed (due to some dubious customer service), so I ordered yet again from a different place. But then all the yarn came in and now, after the sweater and 2 Dulaan hats, I still have 2 more skeins to knit up somehow. Err. Let's just say, if I could have ordered through my LYS, this would not have happened.

This project took so long because of three things: 1) I ran out of yarn, 2) I was knitting the Anemoi vest for the RWS Auction, and 3) I wanted to finish my CPH (selfish little knitter that I am!). Aside from these factors, this was an incredibly easy and fun knit and would be a great project for someone wanting to play with a little colorwork. Knitting in the round is just so easy and great for knitting during movies or drinking and knitting -- a bit boring, but low risk!

Some Socks
I was desperate back in March while in Vermont. I ran out of yarn (I have a yarn packing disorder, I need serious mentoring) and rushed off to find some sock yarn at the LYS (which is really just a sewing store). So I'm standing in front of some great Trekking and I say to myself: "Well, I have some Trekking at home, but I don't have any of this Swizzle stuff, why don't I just try this?" I didn't really feel it. I didn't think, "Too much Trekking? HAHAHA! What a ridiculous concept!" I just grabbed the Swizzle and left, practically trembling from being on a ski vacation, not skiing, and not having ANY YARN. 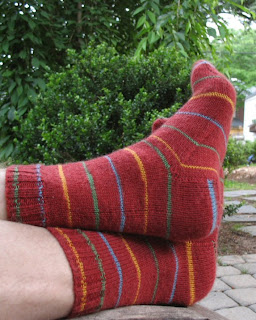 I hate this yarn. It doesn't knit up nicely. It splits. It feels rough. But the BackBou doesn't mind the socks, he says he really likes them. He's a keeper. He is going to get some really nice socks after this.

A Pleasant Surprise!
I reached into the back of my closet today to find the Sea Silk that I bought last year in Victoria, BC. I had finally narrowed down my choices of patterns, feeling a bit bummed that I only had one 400m skein. I found the Sea Silk, untwisted it to place it on the swift and, not unlike the Biblical division of the loaves and fishes, there were two skeins of Sea Silk!! I had bought two! I'm not as daft as I thought I was! I am a knitting genius!

No one else in the household seems to understand, but they smile indulgently as I walk around muttering, "Two skeins! 800 meters! Brilliant!"

The Spartan is lovely! I think it turned out just fabulously. I dig the colors, and you can't see the puckering at all when BackBou is wearing it. Yay!

The Spartan is great - perfect colors. That Backbou is a keeper - great socks too. Totally understanding your joy in finding 2 skeins of Sea Silk!

The BacBou has certainly been the recipient of some knitty-love from you. I think the Spartan looks great, despite all the trouble you had actually getting it to this point.

What a lovely sweater! I love the colors you chose.

Good work!! The sweater is fabulous...classic and wearable for a long, long time!

The sweater and socks look great. He must be feeling the love for sure!

The sweater looks great, I'm glad you figured it out.

I hope we'll see some in-progress pictures of your Sea Silk project.

funny post. the sweater is great! colorworks almost always puckers some until blocking. 800 yards of Sea Silk IS brilliant! we understand.
:-)

What a lovely sweater. And what handsome socks. Nice legs.