While it is not officially the start of summer, I have gotten a jump on my Summer Knitting Queue, starting with the 3 juicy skeins of Katia Jamaica. 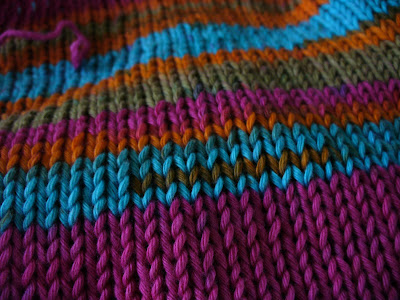 This yarn has spent its year in the stash because I have had trouble committing to a project. I'd been dreaming of a tank-style sun dress for my Rosebud who lives in dresses in summer. I found a couple of patterns but none that really suited what I wanted, since most of them were knit flat, then seamed. With a stripy yarn like Jamaica, I think knitting in the round is the way to go. I'm also not sure if I have enough yarn to make a dress, so I'm thinking I may end up with a tunic. Rosebud loves to rock the tunic, too. But if I make a tunic, I think she'd get more wear out of a tunic with sleeves.

Tank sun dress? Short sleeved tunic? I just couldn't decide. I asked Rosebud for some guidance. She said, "I'd like a short sleeved shirt without a turtleneck. But if you have enough yarn, you can make a dress." Not real helpful.

I had a knitting conundrum. Knitting from the hem up wouldn't work because the proportions of the garment would be wrong. A dress is wider at the bottom edge than a tunic, and decreases would be spaced differently, so if cast on for a dress and ran out of yarn, the tunic would likely be too wide at the bottom and at the armholes. But if I knit from the top down, I would have to commit to some sort of a sleeve, even a small cap sleeve, at the beginning of the project. What if I had enough yarn left over for a dress?

Leave it to Barbara Walker to lead me to a solution. I read the chapter in Knitting from the Top on making sleeveless garments from the top-down, and she introduced me to the invisible cast-on. Her technique has a knitter cast-on provisionally at the mid-back, knit the back piece (and shaping the shoulders using short rows beautifully, but that's for another post) and then knitting over the shoulders and down to knit the bodice. You then join the piece at the armholes by picking up the stitches made in your cast on, and continue to knit from the top-down in the round.

So I learned the invisible cast-on (Fastest. Cast-on. Ever.) and tried her technique, knitting a back and shoulder piece as a gauge swatch.

It was clever and beautifully rendered, but it still wasn't right. It would be great for a solid yarn, but the irregular striping of the Jamaica would never ever match up. And using this technique was committing to a tank, thus a dress. 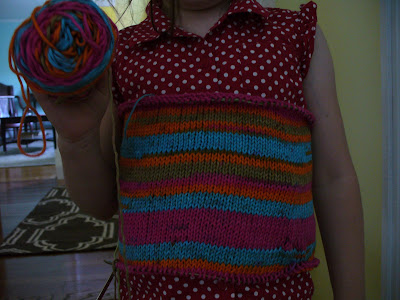 Cast on in the middle! Zero committment on the bodice until you have knitted the body of the garment, thus having either a properly proportioned tunic, or if I seem to have a enough yarn, a dress. Then, I'll knit up from the provisional stitches and make whatever bodice is called for.
Posted by Liz K. at 9:39 PM

My God. You are a problem solver.

That is amazing! My head hurts now and I wasn't even the one to have to figure all that out.

I want to see a drunic ... your problem solving is inspirational. I usually just sit around staring at the yarn ...

Well, if that isn't pure genius, I just don't know what is!

I like your zero commitment plan. Can't wait to see what happens next.

Smart. So smart I am in awe.