Wow, but does free yarn bring people out of the woodwork. Thanks so much to all our new visitors and all the people who stopped by promising to knit Red Scarves with the FREE YARN. Thanks to the Random Number Generator, the winner of the Alpaca Silk is Becky of Knitting Interrupted. Congratulations, and be sure to let us know when you knit your scarf!

Because it is not ambitious enough to be knitting two adult sweaters, I must have some small, instant-gratification projects on the needles. Kathy over at MinxKnits has had me really feeling the Noro-spiration with her Norovember KAL, and I had a lone skein of Kureyon bouncing around in the stash and a hankering to make some mittens to match Rosebud's Kureyon hat from last winter.

At the end of last winter, I dutifully washed and and carefully stored the hats, feeling very much the meticulous housekeeper and carer of knitwear. However, the matching Kureyon hats must have grown in the wash, because unless Rosebud's and my heads both shrunk (unlikely), the hats were way too big. That will teach me to be such a conscientious hausfrau. 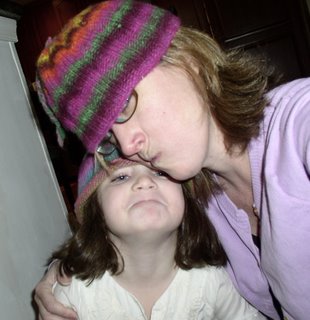 So, I decided a light felting and a trip through the dryer was worth a shot to restore our hats to a proper fit. If they felted too small, or never shrunk enough, some very cold Mongolians would receive our hats via the Dulaan Project.

The felting worked, and the hats are now firmer and way softer. No more scratchy Kureyon hats! 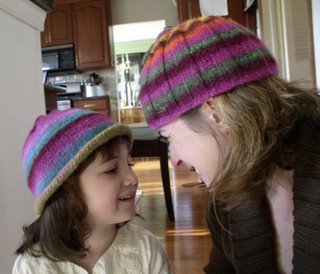 In the meantime, I tackled the mittens. Still glowing with designer-ly inspiration after my Noro jacket success, I decided to whip up some more original, mashed up Noro-ness. I wanted the functionality of a convertible mitten, but a little easier to use for my 5 year old. I decided to make mittens with a flap-covered slit in the palm so that Rosebud's hands could be warm tucked inside a woolen mitten, but her fingers could be easily accessible to tie a shoelace, zip a jacket, or have enough traction to climb the monkey bars on the playground.

With newly minted confidence and a concept in mind, I cast on for the Playground Mittens, using Ann Budd as a guide. They knitted up quickly and effortlessly, and were just as I imagined, I cast on for mitten #2 right away, ready to go from concept to finished object in two short days.

But, just on cue, came my moment of ego-deflation.

I made two left Playground Mittens! 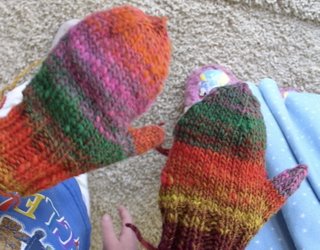 But after a couple of days in time-out and a quick-frog to the flap, the second mitten emerged. 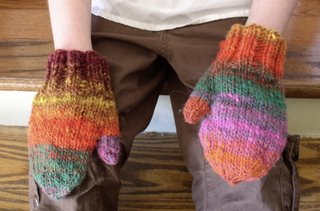 Pattern: Playground Mittens, my own, with much owed to Ann Budd
Yarn: One skein of Noro Kureyon
Notes: Looking back on my experience with the hats, , I should have knit the mittens larger, then lightly felted them to make them a little firmer and a lot softer. There was plenty of yarn left over too. Pepe has since requested a set of mittens just like them, so his version will allow me to experiment some more. 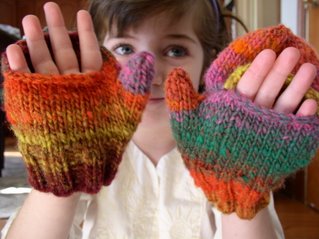 Wow, thank you. I'll be sure and get that scarf started asap. Thank you.

You never cease to amaze me. Love the pics of you and Rosebud, and the hats are just lovely.

will mr. s also beg and plead for a pair of flap mittens?

Just love it! Can I have some? I spend a lot of time at the playground.

Also, did you see the Fake Fair Isle Hat made with Kureyon in MagKnits? Pretty cool.

Yea for the felting! That is a happy ending to the story ;)

And those mittens - and your little one! - are precious!

Love the hats and mittens so bright and colourful.

I have totally been wanting to make a pair of mittens exactly like that! Will you post your pattern?

Great mitts! My kids would be all over those ... when my non-knitting projects slow down, I'm knitting some of those!

Love the hats and mitts. Such a fun post to see the problem...solved!

Hi, found your blog via googling for kureyon mittens... they're so adorable !! Would you be writing a pattern..? :-P

oh, those are just like my "reporter mittens." you can take notes with them AND stay warm. great pattern!

Lovely uses for the Kureyon! I've got five skeins of Kureyon mostly knitted into and openwork scarf, but I think I may just have to turn it into a felted bag.

I love Noro mittens - the mismatch is too fun!

How do we get Playground Mittens pattern?
We've been looking and looking for one!!!!!