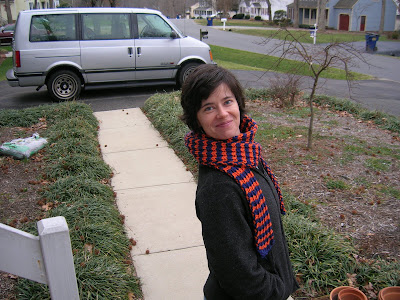 Inspired by Bonne Marie's new Player hat, I decided to make a rally scarf for my Astro Van drivin', Chicago Bears lovin' pal. I thought her high security clearance level would not permit me to show her face on XRK blog, but she slipped and let me snap a shot. Isn't she a cutie?

I keep telling everyone she's going to the Super Bowl, but that's not really true. Her husband surprised her with a plane ticket out of Redskins country to the Windy City to watch the Super Bowl with her lovely mother, eight brothers and sisters, along with in-laws and dozens of neices and nephews. She's so happy, it's better than really going to game. Nice job big guy, we're all impressed!

The scarf is Cascade 220 in organge and Patons Classic Wool Merino in navy. I doubled the yarn and knit in a K2P2 rib on 10 1/2s until the yarn was gone. A simple gift for a wonderful friend. Go Bears!

What an amazing present! I may have to root for the Bears now!

Great scarf Mo! And doesn't she look super in it?

You are a good friend for making her this scarf -- I'm sure she cherishes it.

lt. is really cute, and the best part is that she loves it!

Loretta @ Stitching the Night Away said...