Our pals at Two Sharp Sticks are having a contest on their blog where they ask knitbloggers to share their "How I Learned to Knit" stories. Mine is especially timely as I first learned to knit, like Eyeknit, on Super Bowl Sunday.

For as long as I can remember, my Mom's best friend has been Maryellen, a passionate lifelong knitter who excelled in all things crafty, like needlepoint and sewing. She is also an amazing cook and throws a great party, but she is not exactly what I would call organized. One time our families had Thanksgiving together and dinner was served dish by dish, since nothing got done at the same time. I think we had gravy for dessert.

Maryellen is also what you might call bold. She has a loud laugh and a no-bull approach towards life. She has a marvelous sense of humor, and has the kindest, most giving and accepting heart. She also curses like a sailor. In fact, she sometimes curses worse than sailors. It is this that makes my mom and Maryellen an odd pair, though, because my mom absolutely hates cursing. Passionately. I am convinced that I am the only girl in my generation who never saw Grease because there was too much cursing. One of the motivations for keeping this blog fairly PG-rated is that Mom is a regular reader, and I don't want her to be offended. You know, by my knitting blog.

Maryellen was the first adult I ever cursed in front of, when I called her son an a**hole (he was being one, incidentally -- even she agreed), and she is the one who taught me to knit.

My mother is not what you would call a crafty person. My mom is a reader; She reads three newspapers a day, cover to cover. My mom is a financial genius and powerful force in an argument. She knows everything about construction and home renovation, bakes the best apple pie and makes perfect gravy every time, but she does not craft.

So I have no clue why she bugged Maryellen to teach me to knit, but it was all Mom's idea. So on Super Bowl Sunday in (I think) 1981, a few families gathered for a party, and I got my knitting lesson.

I quickly learned knit and purl, but never really got beyond that. I could make long, rectangular schmattes, but that was about it. I couldn't cast on or bind off, and had no idea how to make my knitting into something useful or wearable. I mean, I only had that one lesson. 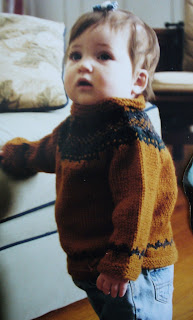 Maryellen's handiwork on Rosebud, about 10 months

But I instantly connected with the appeal of knitting. The knits and purls stayed with me, and periodically, I would pick it up. High school knitting club with Sister Sallie taught me to cast on and bind off. Post-college unemployment-induced bouts of insomnia was when I dabbled in cross-stitch, but it was Maryellen's metal US8s that I packed from apartment to apartment until I ended up crossing paths with Mo who reignited my interest in knitting in 2001. I pulled out those needles, bought a Teach Yourself to Knit kit, and have rarely gone a day without it since.

It was 26 years ago this weekend that I learned to knit, and I have Maryellen to thank so much for teaching me to knit.

(Mom, stop reading now! Do not scroll down, Mom.) 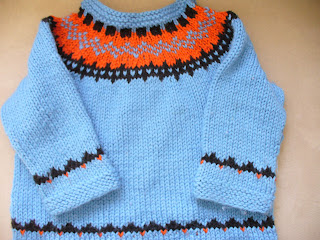 Great story, and a sweet tribute to Maryellen, who will certainly get a kick out of this. What beautiful sweaters she made for your kids!

What a great story! I love the fact that your mom and Maryellen are the best of friends even when they 'seem' so different.

That is one *!#*ing great story! Thanks for spreading the knitting love Maryellen!

I wish my grandmom were still around so that I could thank her properly for teaching me how to knit waaaaaaaaay back in 1967. yes, before SOME of you were even born! LOL :-)

she died in 1988; I did not pick up the needles/yarn again until 2001. they have rarely left my hands since.

as franklin habit mentioned in his blog lately "each one, teach one". we have an obligation to teach another in our lifetime. I have done my part.

AAHH! Love the picture of Rosebud. That's about when we met. Seems like yesterday.

And, thank you Maryellen!What a great story.

Hee--I think everyone should be taught to knit by someone who appreciates the necessity of cussing to the early learning stages.

Maryellen sounds like a great woman and you have a great knitting story.

Your comment about that profanity-laden movie, "Grease", made me laugh out loud. My mother, an otherwise sensible and with-it lady, wouldn't even let us say "fart". And now of course I live with two guys whose greatest joy is working the words "fart" or "butt" into conversation. Sigh.

Wonderful story!
Happy Knitaversary!
I too keep my blog family friendly out of respect for my mom. I'm happy to do it. She finds such joy in reading my blog! Bravo for great moms and their magnificent apple pies!

Fabulous story Liz. I'm glad you were able to spend that anniversary knitting. And I cannot get enough of that pic of Rosebud! What a cutie-patootie.

PS Thanks for the sausage balls.