First, thanks for all the well-wishes. I am on the mend, although I sound like a 3 pack-a-day smoker when I cough.

There must have been some kind of knitters mind meld between Minty and me last week.

Before leaving for my Chicago trip, I had to go through the traditional "what knitting to pack" deliberations. I usually travel with socks, and wanted to use some gorgeous Koigu in the stash. As a general rule, Koigu gets knitted first. Koigu does not marinate. It deserves to be moved to the front of the queue. It demands to be knit. But what pattern to choose? I pawed through the usual suspects, and found nothing that worked with Queen KPPPM.

Then I thought of one of my favorite blog-friends and budding sock designer, Minty. She has designed some great patterns, and shares my deep affinity for the KPPPM and the toe-ups. I went with Anastasia, since it seemed the simplest, and really, that's what I want in my socks lately. And its an homage to Anastasia Krupnik, one of my girlhood heroes.

And while I was choosing my favorite Minty pattern, I was winning yarn at her blog! Yay!

I love this fuschia Koigu so very much, and Minty's pattern is the bomb, but I just made mistakes galore on these socks. And not just on the first one. I truly suck at short-row heels. Not at the actual making of the short rows and the picking up the wraps. Those are lovely! No, my holes are always at the join of the heel and the instep, and even picking up stitches over the gap looks ugly. This is why the Widdershins heel flap is my savior, but unfortunately, I do not have it committed to memory (yet) and thus was stuck with ugly short row heels. At least it sort of blends with the pattern.

My Anastasias kept me company while I was sick in bed, and in my feverish state I continued to make errors. The final one was to cast off the second sock far too soon, and they are noticeably different lengths. In my illness-induced malaise, I didn't care enough to re-do. 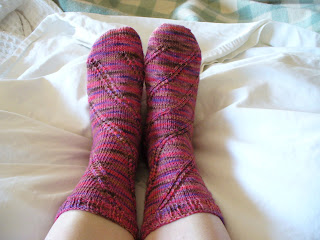 And as I blog-surfed over the weekend, I noticed poor Minty was afflicted with the same inertia when faced with a simple fix on her latest pair of socks.

I too have not had the urge to even out these socks, much less re-do the heels to make them presentable. But they may be frogged. Why?


The siren call of the leftover fuschia Koigu and another particularly demanding green KPPPM colorway ended up becoming this: 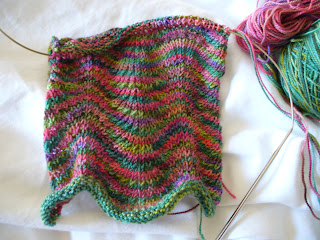 Am I crazy? Should I frog the socks in service of CHEVRON MADNESS that is sweeping the internets? Or should I just let an FO be actually finished? I'm torn. Leave a comment.
Posted by Liz K. at 5:46 PM

finish the socks, AND- get more yarn if you need for the "madness"
:-)
the socks look great.

Knitting in Pink said...
This comment has been removed by the author.
6:19 PM

No no no! Don't frog the socks-they are GORGEOUS! Just buy some more delicious Koigu, the dye lot shouldn't matter with the scarf...

Hope you continue to get better!

i say keep em! if the length differences bothers you you can always pick out the cast off and add a little length.

I'm OCD knitter girl AND a stash enhancing Jezebel, , so I'd even up the socks (their different lengths are bothering me now - see, I'm crazy - and I'm not even wearing 'em) and go buy more Koigu. I do like how your chevron scarf looks. (and hey, I just joined the chevron scarf flickr group today, too)

Glad to know you're feeling better.
About your little conundrum...if it were me and I knew there's no chance of me going back to fix the problem, I would frog. Tough, huh? :D

The socks look great! Keep the other ones AND buy more yarn - more yarn...mmmm....!

Great socks and thanks for giving the link to the patterns. Love the scarf, too!! I vote buy more yarn ---- I ALWAYS will vote buy MORE YARN!!!

Hmm... Tough call! But... and this pains me... I think you should frog those pretty socks and either reknit or go for the chevron. The heels are going to taunt you and make you crazy... could result in never wearing them and that would be such a shame. That said, the socks are beautiful in the photo. :)

call the finished socks your own design. make them your "leisure socks", your "at home and I don't give a damn who sees 'em" socks.

Keep the socks! They are beautiful and I can't see a big difference. No one else will see the difference under a pair of pants either.

Wow, I love your Anastasia socks. I'll have to make a pair of those. Thanks!

Honey, I am ALL about the chevron. Socks, schmocks. Frog those babies.

Glad to hear that you are on the mend. :o)

It's not to say the socks aren't pretty, because they are. I'm just all about the chevron, especially the multi-color chevron.

I won't hog the blog anymore.

Love the socks! That patterns looks great no matter what the yarn is (not that your yarn is bad, just that I've seen it in a bunch of different colors now). I just might have to knit it.

I wish in our mind meld I'd gotten some of your knitting mojo! (Mine's still a bit on the fritz.) I'm totally biased, of course, as I LOVE your Anastasias, but if the chevron scarf is calling to you, don't hesitate to rip them out and transform them. I mean, I won't feel badly if that's the route you choose.

Your contest winning yarn finally got put in the mail on Friday, I think. That is, I took them down to the mailroom and it should have gone out on Friday, but who knows, maybe they'll send the package on Monday. Sorry it's taken me forever to get it out! I can't keep up with my own life right now. (Which is also why it took me so long to comment here.) xoxo

You know, you'd think I'd vote for the chevron, but I actually say keep the socks, unless they'll irritate you immensely every time you wear them.

I vote for the chevron. You have lots of socks already, don't you?

P.S. Thanks for the lovely engagement wishes. I'm just now getting around to the thanks, but I do appreciate it.