Six tries was all I needed to knit a mutually acceptable, properly executed, nicely fitting collar for Mr S's sweater. After all variations on funnels and scoops, we settled on a classic roll neck.

It was so hard for him to (in his mind) criticize the original sweater, and it took a little convincing that I was happy to keep trying until we got it right. He felt like he was rejecting my gift and all my hard work by acknowledging that the collar was wonky.

But for me, I was not going to put this sweater in the finished pile until it was right. I spent over two months knitting this sweater, and I expect it to be worn. I want it to be a useful garment, not some symbol of my willingness to put a lot of effort into something for the husband I love.

It was worth the extra two weeks of attention to find an acceptable solution, and I think he now understands that. I also think he liked being greeted every evening upon his return from work with "Hi honey. Take off your shirt."

As promised, here is Mr S in his new, finished sweater. 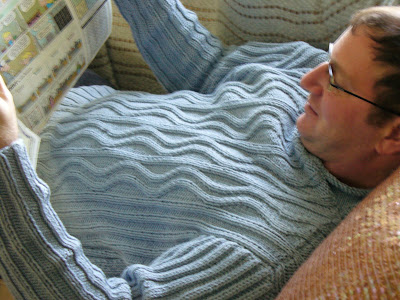 Yarn: Cascade Sierra color #24, 8 skeins
Notes: I know a lot of knitters who do not like to knit cotton, but I am not one of them. I actually quite like knitting with cotton, and quite liked knitting with this (mostly cotton) yarn. It has lovely stitch definition and held up well to frogging. It also has enough body to be able to cable without a cable needle, which can be awfully hard with a slippery cotton yarn.

I also think, like other Cascade Yarns, that Sierra is a great value, with crazy yardage (191 yards) and a high quality yarn for a very reasonable (about $8!) price.

Obviously, the test is going to be in the wearing. I went with the suggested Sierra hoping that the wool content will keep this sweater from growing. After some wear and washing, I'll post an update.

Pattern Mods: I swapped out an uncomfortable, ill-fitting funnel neck for a classic roll neck. I knit one round of purl around the neck and knit about 2" of stockinette.

Lessons learned: I learned how to do nice ribbing one project too late. I am really stuck on how much nicer this sweater could have looked if I learned to rib in the combined style just a little sooner. 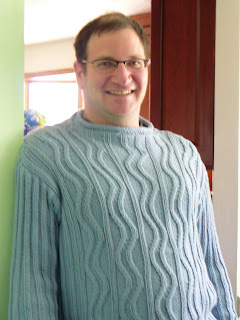 Also, Mr S does not like a funnel neck, no matter how many times we try, no matter what needle we choose or how high/low it hits him. Nor does he like anything that might qualify as a "mock turtleneck." He prefers a classic roll. Or a crew neck.

We'll just have to see if he actually wears this sweater. He promises he will.
Posted by Liz K. at 9:30 AM

The sweater looks great! I actually like the roll neck better than the funnel anyway. More manly casual cool. Rock on Mr S!

I don't think you should kick yourself! The ribbing looks great and he certainly looks really happy with his sweater. I think you did a fabulous job on it. The color, the pattern, the fit - beautiful!

The roll neck is much better. The color looks great on Mr. S. All around a beautiful FO.

oh it turned out just great! I love Sierra, too. I'm interested in finding out how it wears.

It's very very wonderful. If you remember, post random pictures of him wearing the sweater of manly beauty...at the park! At the racetrack! At the opera! At work! Making scones! Wherever.

What a great sweater and a lucky hubby. I like the roll neck much better. It really looks fantastic on him. I look forward to the yarn updates.

I haven't knit for my guy yet but next year is our 7th anniversary which traditionally is wool so maybe there's a (grown-up) guy knit in my future. I'll keep this project in mind :-)

Liz, the sweater is perfect! great work at finding the right collar--roll-neck seems like it was the original design for this sweater, with the cabling. I definitely hope he wears it (I'm sure he will).

Great looking sweater! I admired it in the IK issue, but didn't so much like the neck, great alteration! And thanks for the combined ribbing tip, I'll try that out soon.

Perfection has been achieved! Looks beyond wonderful. And woo! for having a snuggly, PERFECT-necked sweater to read the comics in! What a lucky duck.

PS: We should totally plan a meet-up...

and SUCH a handsome couple of pictures, too (drool drool, pant pant, wink wink nudge nudge)

Hubba hubba. What everyone else said, too. Sincerely. And by the way, a million thanks for watching the Banana on Friday. You're the best!! Bisous!

First of all, I love the title -- before I even got to the body of the post and the photos, I knew what sweater it was and who it was for. I really like the finished product, with the mods, and I'm now wondering if my mister would like one of those. . . I'm also curious about what you mean about doing the ribbing better. Is there a special trick or technique?

Wohooo! You must be so proud. It looks great and he looks happy in it.
What more can you ask for?

Isel makes a great point - not only is it a gorgeous sweater, but your husband looks truly relaxed and comfortable in it.

And kudos to you for sweatin' the details - not my strong suit, so you showed me tangible proof that it's worth it.

Perseverence pays off! Way to go Liz! Mr. S, you look fabulous in the sweater -- you wear it well! Congrats!

Nice work Liz! I think the roll neck was definitely the way to go!

The sweater is so great! I am sure he will be very warm and comfortable in it.

The sweater is fabulous, and Mr. S looks great in it. I just bought some Sierra to make myself a summer hat. I've not knit with it before, but I'm glad to see how nice it knits up.

That is such a GREAT sweater, Liz. Major kudos to you! :) I quite like working with cotton too. It has a nice texture, and can really be worn all year round! I am gonna give this sweater another glance... for my Mr. ;)

Wow, that looks great! A ncie manly sweater. I hope he wears it all the time! Funnel necks are icky - I like your choice better.

Wow, this turned out so nice and it looks fantasic on him! This is one of my favorite colors. Brillant job!

Anyhoo, the sweater looks great and the yarn (as all Cascade yarns) is a great value - I look forward to hearing how it wears.

How did you "block" the sweater? If you didn't immerse in water and gently swish, but instead steamed or sprayed or left it au natural, you should immerse it - the wonkiness will all come out. Just leave it in the sink for about a half an hour. Voila - wonkless!