When I was a kid, I had to catch the bus to Catholic school at a truly ungodly (sorry) hour of 7 am. Those miserable mornings on the corner came with with freezing knees (we wore knee socks, tights not allowed), and burning ears because I would not wear a hat. I was too cool to wear hat. All hats looked stupid on me, I said. And hats would crush the fluffy perm. We were a skiing family, and I didn't even wear hats on the slopes, for fear my hair would look flattened and staticky in the ski lodge. You know, like everyone else's hair in a ski lodge. I was too vain to be practical, too young and dumb to realize that no one was looking at me or my hair. Or that my perm sucked, and could use a little flattening. Like most adolescents, I feared the judgment of others, which, was usually arbitrary and often cruel.

While I fight the designation of being grown-up, I have evolved past this painfully stupid and self-conscious stage. Now with a child in elementary school, I am anticipating many cold mornings on the corner, waiting for the school bus. And being all grown up, practicality and warmth trumps vanity, but being a knitter means that you can have warm ears and still be darn cute, too. Inspired by fellow funky hat Mom Alison, I present my two latest Single Skein Septemer FOs: 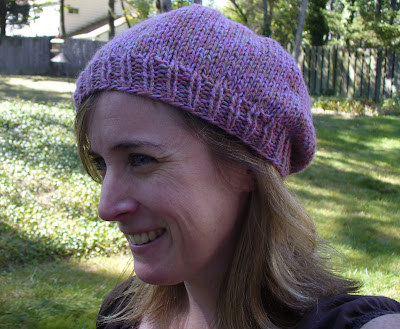 Pattern: le Slouch by Wendy Bernard link to pdf
Yarn and Needles: Artful Yarns Jazz, US 10.5 (ribbing on US 9)
Mods: I chose the stockinette version, mainly because I wanted to crank this sucker out, and seed stitch slows me down.

And for the inevitable ponytail mornings: 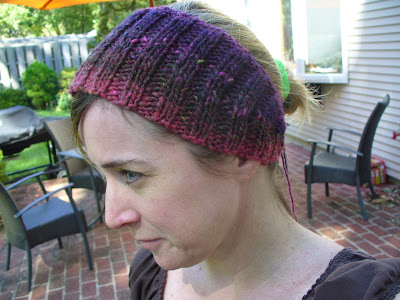 Pattern: Calorimetry by Kathryn Schoendorf
Yarn and Needles: Noro Big Kureyon, US 9
Pattern Mods: Using a bulky yarn, I cast on 80 stitches, and only did the short row repeat 10 times. I actually knit this headband multiple times to get it just right, and each time, it only look about two hours to make. And yes, that is my yarn tail hanging down. I have not yet sewed on a button, so I tied it shut.

I often bristle at being a grown-up, but if being grown-up means I have cute hats and warm ears at the bus stop, then that's a good thing. It means that I no longer care what anyone else thinks of me, my hair or my hats, which is even better. Best, it means that no one else cares either, and if they do, well, then they are just so immature!
Posted by Liz K. at 9:25 AM

the Calorimetry looks particularly cute on you, though, so I don't think you have to worry about anyone making fun :)

Bridget said...
This comment has been removed by the author.
11:23 AM

Oh dear, I just accidentally deleted my comment ... so that you don't miss my observations and wit, here it is again:

First of all, I love both of your projects, they look great!

(Did you get the "waiting in the cold builds character" lecture from the nuns? They - of course at the time - were meanwhile, covered in layers of long clothes.

Both are really cute - glad you got over your anti-hat obsession!

I like them both! The colors are great on you and :-p to anyone that doesn't like it.

If only I wasn't ALWAYS warm in the winter, now. :-(
But maybe that slouch hat. Maybe...

Love the colors of both, especially the Big Kureyon! I hope my Calorimetry comes out as good as yours. I fear it may be too big, but then again, I do have a fat head.

Aw, both look fantastic on you! Love the bulkier Calorimetry.

When I was a kid, all the girls insisted on wearing earmuffs to preserve the perms, but the weird plastic headband part would always get caught in your spiral curls.

Those look fantastic on you!

I remember the girls in the ski lodge with their portable butane curling irons redoing the curls after every run!

What cute little ear warmers, I especially like le slouch, very flattering on you!

The Noro looks great as a calorimetry! Must remember that...I have some in my stash. :-)

Cute knits! Cute post! I often wonder if I could pull off wearing a beret...who cares! At least I would be warm. I I think Le Slouch is a perfect one skein project...huh.

And let's hear it for scary perms. Thank the gods that they're in our past.

I had a perm. It was a flippy Farrah Fawcett kind. I wore ear muffs. I'm so glad those days are gone.

The hat and head band are fabulous!