Single Skein September has not been nearly as productive as I had hoped. I have so far finished two single skein projects: the tipless mitts (thanks so much for the kind comments, BTW) and a beret about which I will blog later. My knitting has been scattered and a little frazzled, just like my life, thanks for the Back to School gauntlet of meetings, homework, practices, and getting dinner on the table at a decent hour.

Life has really changed in our home, as my daughter is now in school full-time, for the first time. She's also on a soccer team, and she's lost a front tooth. There's been a lot swirling around her, and so it seems appropriate that when I really had a chance to focus my knitting energy, I focused it on Rosebud's cropped cardigan. 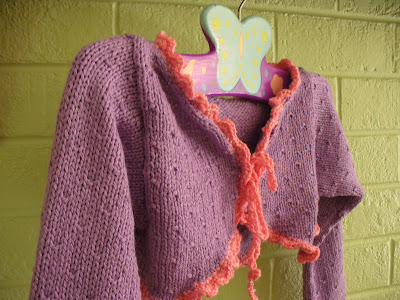 This was actually designed as a stash buster, but only if you are willing to stretch the definition of "stash busting" to mean purchasing three new balls of yarn to make the majority of the piece. I've had the pink contrast yarn hanging around in my stash for almost a year now, and when I went to the yarn shop looking for a purple yarn to make a little sweater for my newly-obsessed-with-purple daughter, I spotted the same Louisa Harding Kashmir DK in a pretty deep lavender, the same as that pink single skein. I considered a pullover sweater, using the pink as a wide stripe detail, but I wanted to stick with the four balls of yarn I had and knew I was pushing the yardage for a full-sized sweater, thus a cropped cardi.

I began this project thinking I would make a top-down raglan, to maximize the yarn I did have. I could knit the bodice and the sleeves, and if I had any yarn left over, I could add length to the body of the sweater. However, I was just in love with this subtle little stitch pattern, and it was becoming a headache trying to figure out how to incorporate the stitch pattern neatly and symmetrically into the raglan increases. I ended up relying a bit on Ann Budd and made a modified-drop sleeve in pieces. I really don't mind seaming, and it was fairly to quick to knit the individual pieces.

The biggest challenge was adding an edging that didn't make the curved fronts all puckered or bulging. I originally planned a reverse-stockinette rolled edge (one of my favorites), and then attempted an applied i-cord, but neither worked. Instead, as I have been dabbling a bit in crochet, I thought I could add a ruffled edge that would sort of camouflage any weird flares. the fact that crochet eats yarn was not lost on me, because I really wanted to use all that pink yarn. I think the crochet is really cute, and it was much more forgiving as an edging. 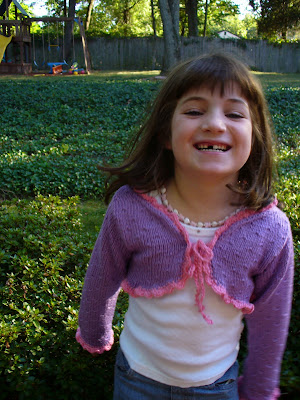 As with most of my attempts at design, it isn't perfect. The shoulders are too narrow, and the sweater is just not quite big enough. My ease calculations were just a bit off, and I also realize that I did not account for selvages when determining my stitch counts. But designing for my daughter is just so forgiving. It still looks awfully cute on her, and she, as predicted, loves it. 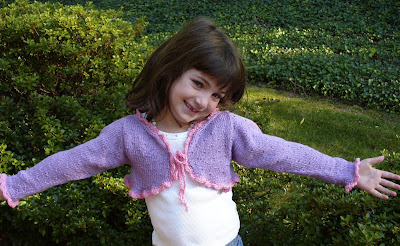 Thankfully, you don't have to be perfect to be loved.
Posted by Liz K. at 3:58 PM

Oh Liz, she looks perfectly adorable in it! Once again, your design instincts did not lead you astray.

And I love the missing-tooth Jack O'Lantern look too. ;o)

PS The crochet is fabulous!

That last picture is totally adorable! She is darling in that cute design! I really should knit more for my kids. Bad mom that I am.

That really is adorable, and I love the crochet edging! Excellent yarn usage. It doesn't look too small from here, but if it is, I bet an aggressive blocking would help.

It's really cute. I don't notice any of the flaws you point out, and I'm sure your daughter doesn't either. It's a great piece and I can see she'll want to wear it often.

Ditto what everyone else said! You did a great job!! And your definition of a stash-busting project made me laugh out loud. I've had many of the same!

I think it's great, and I can imagine she'll wear it quite a bit.

What a cute little girl!

Obviously she LOVE'S it. What a special mom you are knitting cashmere for a kid!!! Wow!

How excellent! I can't believe how different she looks with the front tooth missing! Rosebud, you rock!

And the cashmere really looks great -- the edging is beautiful! I love your stashbusting ...

I am just now, today, finding my feet again after the start of school. Crazy, isn't it?

It looks pretty perfect from here. What a great time in her life -- so many new exciting changes and a new sweater too.

Who is going to argue with cashmere? No one, that's who! It's so cute, Liz! And it's so obvious your daughter loves it, winner!

totally adorable, especially the edging! well, and the kiddo. :)

The world is a great big oyster, and Rosebud is a pearl sitting right in the middle of it. She's *too* cute in her first cashmere...and I, too, give a thumbs up to that edging. It gives it that girly girl look that's perfect for a garment worn by one who has just lost a front tooth.

Another "well done, Liz" from the peanut gallery!

Looks perfect to me!

So cute! I love the design (no flaws are evident in the photos) and it looks perfect on Rosebud!

just adorable! and the gappy grin is so cute!