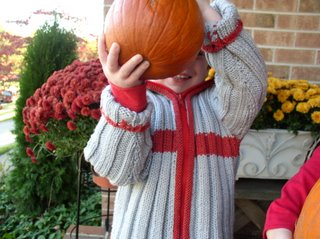 Accordion is finished! After a marathon finishing session yesterday, I sewed in the zipper, added sleeves, seamed the sides of the sweater and wove in an absolutely enormous number of ends. After all that sturm und drang about the zipper, I have but one thing to say:

It's not that bad. Really. Don't fear the zippers.

But here's the secret. Remember those reverse stockinette rolly front bands I added to the sweater to neaten the edges of this sweater? It turns out that this was truly a flash of unwitting genius. These contrasting bands created a perfect straight line for me to line up the zipper. They also created the perfect hiding place for my horrid hand-sewing. Without them, the zipper would have been a much uglier proposition.

This is not to say that the zipper is perfect, but its imperfections are barely noticeable. I have a lot to learn about sewing, but I figure I did not emerge from the womb knowing how to knit cables either, so why would I know how to sew without learning and trying, making mistakes and trying again, asking more knowledgeable people and trying some more.

Accordion, as some readers may remember, was knitted with recycled yarn from a frogged sweater. What I didn't say is that this particular sweater happened to be my first sweater for me. I had returned to knitting about a year or so previous, and made mostly baby items, but after seeing Tempting, I knew that was my first sweater. So in December of 2003, I cast on. It was a piece of cake to knit, but I was meticulous about it. I learned about substituting yarns, about swatching in the round, and about making seamless garments. I was a beautiful, flawless finished knit, and I was so proud of it.

But, as I wrote before, it looked terrible on me. The knitting was well done, the design was lovely, the pattern was executed correctly, but the sweater itself was unflattering. I had a lesson to learn about what sweaters look good on me, how ribs behave on a, er, generous chest, especially in a light colored yarn. I had to learn to consider the bra that would go under the sweater. You can look here in my Flickr gallery if you dare.

I have learned how to install zippers.

And I have learned not to expect accolades from my son, who upon donning the sweater for the first time scrunched up his darling face, and said, "Mommy, let's take it off. It hurts me!" 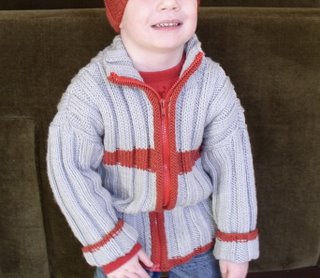 He has since changed his mind. He likes it now. He now wants to know why I didn't make pockets or a hood.
Yarn: Maggi Knits Merino Aran. This very soft 100% merino yarn has held up very well, considering it has been knit, worn, washed, frogged, and knit again. We'll see what a three-year old does to it, if I can get him to wear it.
Pattern: Accordion, Knitty Fall 2003
Needles: US7, US4 for front bands.
Mods: Added front bands, and used a longer zipper, so that the collar can be zipped all the way closed.
Posted by Liz K. at 9:43 PM

wow - it looks fantastic on pepe!

the first pix of him holding the pumpkin is cuter than cute.

congrats on mastering another piece of the puzzle that is knitting!

Great job on the sewing. The whole sweater including child inside it, is cute.

i'm very proud of you. i finally caved this weekend and added a single frog and buttons to the sweater that's been sitting her waiting for a zipper forever. i'm still too afraid.

great job on this, it looks fantastic. thanks for the inspiration on the sipper, I have to put one soon in the "ribbed cardi" and dread it a bit.
the model is terrific.
:-)

Hurrah! Pepe is the best and the sweater really looks fantastic on him. You are really fearless now! I keep humming "don't fear the zipper ..." a la Blue Oyster Cult ... can I have some more cowbell?

Accordian is wonderful and Pepe looks pretty happy to be wearing it!

I read what you wrote about Tempting. I agree!!! Great on a little, slim person but once you get up in ANY numbers (be it age or size of "parts") it's not good to have ribbing.

Congrats on the zipper. I haven't done it yet...and need to on my Ribby Cardi (finished in 2005! Not sewn up)

Ooooh, I want to do an accordion. And I love the learning that went on. I think you're way beyond me. I checked out Tempting. Wolf-whistling's okay, right?

Oh, CUTE sweater. and congrats on mastering the zipper--I fear it, I really do.

I don't fear the zipper - that's what my dry cleaner/tailor is for!

blogger was misbehaving last night so I couldn't see the photos in bloglines nor connect to your site to see the FO. I just remembered to check it out and OH MY GOD! It looks absolutely awesome. Great job. I want to put a zipper in something now!

Well done, dear friend. I expected nothing less of you. Pepe is adorable as can be. See you on Tuesday?

The sweater is great (on my monitor it's grey and red and very sharp looking; and you could even add pockets & hood very easily if you wanted to.
Gillian

I really enjoyed reading about your knitting journey. Now, that's exactly how I would describe a master knitter--learning from inadvertent mistakes and being brave enough to reknit the yarn into something better and well-loved. You're a really useful engine! (Too much little boy facetime here)