Despite the kitchen-makeover of the last month, I am still dreaming of my ultimate kitchen. In my ultimate kitchen, I will have a comfy couch. I will also have a tribute to Mr. S. and his all-time Triumphant Moments in Eating. I began this collection when his mother gave me a picture of him as a two month old infant, propped up next to the gleaming Thanksgiving turkey, with someone holding the giant turkey leg in his little hand. A particularly prescient and hilariously politically incorrect infant photo-op, it has grown into an annual Kids-With-the-Turkey photo-op. 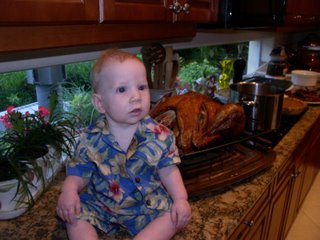 I have a picture of him eating a 4 pound lobster in Maine. The claw was as big as my hand (we took a picture of that too). There's also the grinning shot of him surrounded by giant wheels of cheese at Neal's Yard Dairy. I've saved postcards and match books from some of the fine-dining experiences we've had. I have a pen-and-ink picture of our favorite restaurant in Richmond, a going-away gift from a dear friend. And this weekend, I made an addition to the wall. 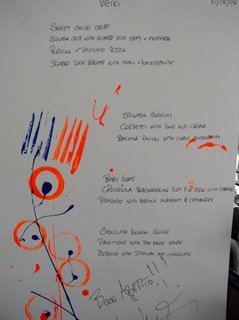 This is our menu from Vetri, a 15-table restaurant in Center City Philadelphia. It was handwritten, painted and signed by the chef, Mark Vetri.

Saturday night at Vetri is strictly Degustazione, the chef's menu. Mr S had eight courses, I stuck with six, and we went with the wine-pairing option as well. Thus, we had just about everything on the menu, and every dish was a swoon-worthy winner, and a perfect wine pairing for each course (small pours, though, half-glasses). The spinach gnocchi is light and flavorful, with just the right amount of garlic and parmesan. I generally do not like duck, but the cured duck was smoky and bacony, without that greasy, heavy texture I dislike. The zeppole were like the lightest beignets, sprnkled with light sugar. I am no food critic, but I will say, it was the best fine Italian I've had outside of Italy. The food was exquisite, the wine, incredible. The service was impeccable and the company was incomparable.

I managed to wrangle a trip to Loop once he heard (thanks, Wendy!) that there was a bar nearby. So off he went for a Bloody Mary, and here's what I bought: 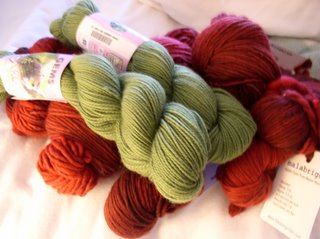 Malabrigo. Gems Pearl.
And I finished my socks, just in time for the end of Socktoberfest! 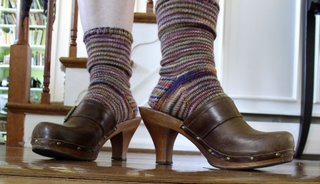 Yarn: Socks that Rock, lightweight, color Marbles. OK, now I get it. It is a pleasure both knit and wear.
Pattern: Widdershins, Knitty, Summer 2006

I have found my toe-up simple stockinette sock pattern. I love this heel flap construction. You get a great gusset without having to pick up stitches. These socks began life as Pomatomi, then Jaywalkers, but I decided the yarn was best just as a simple stockinette.

Oh, and have I mentioned I'm knitting a sweater? More on that later this week.
Posted by Liz K. at 4:58 PM

man, but don't YOU get to go to all the nice places?

Love the socks & clogs--perfect color combo. But I am really drooling over the duck, the gnocchi and the zeppole!

vetri's on my list -- glad to hear you liked it. it's hard to decide in philly...it's such a great restaurant town! glad you had such a nice time.

as for the socks -- love em with the clogs. if i ever knit thru all the STR that i have i'm going to have to try the lightweight.

that's it. I'm calling Vetri tomorrow and making a reservation. I've tried in the past but never could get in when I wanted--this time I'll happily do it on THEIR schedule. so jealous!!!

love the kiddo with the turkey, too. my mom recently gave me a photo of me as a 4 year old standing on a chair hovering over the turkey, with a sort of devilishly happy smile on my face. I can only assume I just stole some crispy skin!

Oh yum! I need need to get myself into Vetri!!!

Glad to see you made it to Loop!

I've been struggling over what to make with my Socks that Rock - they're just so darn colorful, that it doesn't seem like anything too complicated would show off the yarn - but then I thought simple stockinette wasn't good enough. Seeing your socks, simple stock is the way to go!

Your "foodie" talk made me hungry! LOL!

You going to Stitches?

Sounds like an incredible food experience! But I'm still in shock at the heels on those clogs ... nice socks btw!

Sometimes nothing beats a simple, plain stockinette sock. The socks look great with the fun shoes!

I shouldn't have come over here while I was hungy. Love the socks and those clogs are awesome!